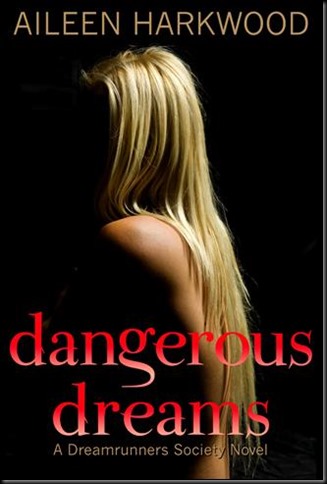 Plagued by nightmares of terrorist bombings, Lara Freberg is a so-called Lost One, unaware of her psychic gift for literally being in two places at once. While her true body sleeps, her twin is helplessly drawn to scenes of unspeakable horror.

Kidnapped by a corrupt, CIA-like organization determined to exploit her abilities, Lara is given no choice. Cooperate or die. Until the midnight spying missions that make her the willing prisoner of an erotic stranger. Does she dare trust him with her warning of a future attack on American soil?
Jack Mayfield will never forgive himself for being too late to free Lara from the Greys, The Dreamrunners Society's sworn enemies. An elite front line operative, Jack is able to find and save the Lost Ones no one else can. Nothing, however, can prepare him for the shock of losing the woman who holds the key to unlocking his war weary heart. Now Jack is in a race for her life. Lara's dreaming half may be able to drive him wild with passion, but can he believe her when she says the Greys haven't turned her against him and the Society?
It won't be easy to rescue his one true love from certain death.

The hand that clamped itself over Lara Freberg’s sleeping face was sweaty and smelled of formaldehyde. She jerked awake in an instant, completely disoriented.

She’d been deep into one of her nightmares. Explosions. Fires. Hundreds slaughtered. Something grabbing her ankle.

Where was she? Was she still in the dream? No one ever touched her in the nightmares.

She was in her bed, at home in her Baltimore condo.

The crushing weight she’d felt in her dream, which she’d intuited as the emotional weight of the violence perpetrated on innocent lives, was actual, crushing weight in real life. A strange man knelt on top of her.

Lara tried to scream, but the hand over her mouth dug into her face in an explicit warning. The man’s knees pinned her thighs to the mattress, while his free hand easily captured both her wrists and forced her still.

She bucked against his restraint on her.

Was she talking to her?

No, he directed his words toward someone else in her bedroom she couldn’t see. They shouldn’t have been able to get in here. She paid for a security service, as did everyone else in the complex. Who were they? What did they want?

Then it hit her, the answer obvious. Her heart, already racing, sped up to a painful degree.

Frantically, she fought harder. She tried to throw off the man who smelled like dead things, but tangled up in her bedcovers, with his body weight pressing down on her, she was trapped to the bed.

“Forget it, Lara,” Formaldehyde man said. He pushed down, shoving her head so hard into the mattress she could feel each spring through the padding. That horrible smell coming off of his skin reminded her of fetal pigs in eighth grade biology class. Bile rose in her throat. She began to gag.

“Now,” the man said to his accomplice.

She still couldn’t make out her attacker’s face in the dark, but she could tell he was lean, fit, and had a short, professional haircut. The other man, what she could see of him in the shadows, looked similar. Why would men like this break into her apartment to rape her?

Something glinted in her peripheral vision, the needle at the end of a disposable syringe. She watched the accomplice holding the syringe come closer. A tiny squirt of liquid from the tip of the needle sprayed her bare skin.

Lara thrashed anew, her thoughts frenzied. She didn’t know what they wanted with her, or why they were here, but she imagined the worse, that she had only hours, if that, to live. She sobbed without being fully aware of it. What was next? What would they do to her? Would they torture her first? Cut? Stab? Blind? Skin?

She couldn’t fight them. She didn’t have a chance at all. Seconds later, the needle jabbed her, a sharp, slicing pain. Coldness followed as the substance was forced into her arm by the syringe’s plunger.

Her head swam. Whatever the man had given her produced an immediate lethargy she couldn’t battle. Her arms and legs became too heavy to move.

Her attacker got up off of her, deciding she was no longer a threat.

He grabbed her roughly and slung her over his shoulder. She tried to lift her head, but her neck muscles wouldn’t cooperate. Whatever had been in the syringe muted her sense of fear. She no longer cared she was taken from her bed.

It was just before she blacked out that she saw a third man in her bedroom, near the closet. Her head swung like a rag doll as her captor made an abrupt turn toward the bedroom door, but even looking at the world from upside down, she couldn’t miss him.

“Wow,” she whispered, spotting her own shadowed reflection in her closet mirror, visible right through his body.

His presence suddenly caused the room to grow brighter. She had the wild notion he gathered the shadows from the darkest corners of the room to create a body for himself, while his skin flared with golden light, and he became more substantial by the second. He materialized his way into the room. It made no sense, but that was precisely what she saw.

Odder still, neither of the other men in the room reacted to the brilliant, rich light he gave off. He towered over them, yet they appeared not to notice he was there. Powerfully built, he was naked to the waist, barefoot and clothed only in a well-worn pair of jeans. Gradually his face and body defined themselves until she could almost make out the line of a strong, knife-edge jaw and the shimmer of moonlight haloing his black hair.

Fierce indigo eyes gazed directly into hers. A jolt of recognition raced through her.

Lara gasped in shock. She knew him. She was sure of it. An intense rush of déjà vu tingled down her spine. Who was he? How did she know him? Wait…did she know him, really?

But it wasn’t speech. She heard his words in her mind!

I need you to stay conscious.

“Who are you?” she whispered, her voice slurring.

“The ones who own you,” said the man carrying her.

Oblivious to the third man’s presence, her abductors thought she was talking to them.

I can’t get to you if you black out, the ghostly figure told her.

His immense shoulders tensed, bracing for action. His palms shoved outward at nothing, as if he pushed against an invisible barrier, leaned into it with everything he had, and was inexplicably held back.

Stay with me! Stay awake!

Top prize is a pretty sterling silver, mother of pearl, and gemstone necklace from a New Mexico art gallery, retail $120 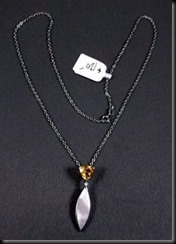 Second prize a cool pair of earrings, 24kt gold plated and made by hand from real leaves. 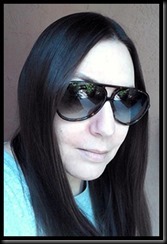 Aileen Harkwood is a die hard fan of the mysteries, thrills and romances life has to offer and has wanted to write her own since she penned her first, safely-hidden-away-in-a-drawer-never-to-see-the-light-of-day novel in high school. She has a B.A. in Creative Writing, and resides in the Southern Rockies of the United States with her family, a Labrador with an extensive chew stick collection, and two cats named after birds.