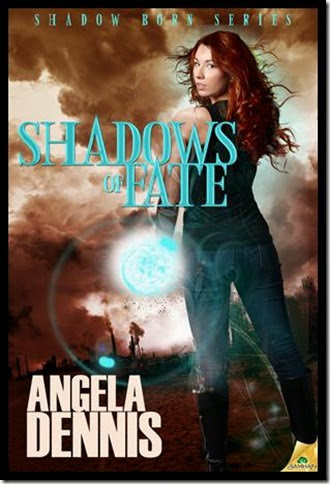 Tagline: Redemption lies beyond the veil between truth and lies.

After witnessing her husband’s brutal murder, Brenna Baudouin lost control of her Shadow Bearer powers and wreaked havoc on her home world. Her penance: one hundred years policing hordes of supernatural misfits that spilled onto the Earthly plane after a cataclysmic war.

She’s on a routine exorcism run when she learns she’s been assigned a new partner. But there’s something about this Shadow Bearer that sparks her suspicions. Particularly when people closest to her start turning up as piles of ash.

Gray Warlow holds tight to the glamour that allows him to get close to the woman on whom he plans to wreak vengeance for betraying his people. Yet as he skillfully manipulates his way past her distrust, he begins to see her not as the heartless monster he was led to believe, but a strong, vulnerable woman.

As they work to put together the pieces of a killer’s macabre puzzle, an attraction deeper than blood and bone flares between them. And they must reveal their deepest secrets to avoid becoming the final targets.

Her gaze stretched to the bar. Beneath the glittering liquor bottles and burnt oak, a bottle of Jack in one hand and Grey Goose in the other, stood her target. Dirty blond hair brushed past his eyebrows, the rest tied back in a rubber band. He seemed innocent enough. As he flipped a glass bottle behind his back, muscles rippling on his shirtless body, magic seeped from his skin. It flowed around the women stretched across the bar, their assets on display as well as their lust.

Thankfully, he didn’t get much bang for his buck. This one was weak. Newly possessed, the demon hadn’t had time to gain a strong enough lock on the victim’s body. This shouldn’t take long. The piles of paperwork she had left on her desk might even get done tonight.

She pushed through the crowd, stripping her leather duster off her shoulders as she went. The black corset underneath, paired with tight leather pants, flattered her figure. She turned heads, especially the demon’s. She released the hair tie at the back of her neck. With a quick shake, her burnt copper curls slid down to her waist. She stopped at one of the tiny tables and threw her coat across the barstool.

Eyes closed, she pretended the music was something more aesthetically pleasing as she stepped onto the dance floor, keeping her mark at the forefront of her mind. She felt his eyes on her body as she swayed to the music. Hips gyrating to the heavy beat, she pulled on her glamour to blend in with the other dancers as she let her magic wrap his body. Losing herself in the music, she let him watch her move, feeling his desire amp. His energy vibrated as he made his way through the crowd, his power wild.

His hands draped her hips and he pulled her to him, his magic sliding over her body. Darkness tinged her aura, but she shrugged it off. Dealing with demon magic never got easier, but his wasn’t powerful. Grinning, she wrapped her hand around his neck, pulling him close until her lips brushed his ear. His burning skin jumped against her touch.

They stilled for a moment as the DJ switched tracks. “Think you could get me a drink?” she breathed, brushing a hand down his bare back. “I’m thirsty.” She grinned as he nodded, eager, the demon jumping beneath his skin.

“Anything for you, darlin’.” He wrapped a possessive arm around her waist, moving her toward the bar. “What’s your poison?”

A grin played on his lips. “My kinda woman.”

Pushing past the other bartender, he grabbed a bottle of Jack and poured her shot. She caught it as it slid across the splintered wooden bar. Tossing it back, she reveled in the slow burn of the liquor. It was an old favorite. Just cause she was working didn’t mean she couldn’t treat herself.

She tossed back a second shot, thankful she didn’t have the ability to get drunk. Giving the demon her best longing look, she leaned forward. “Thanks. I needed that,” she murmured. “What’s your name?”

Leaning forward, she traced a finger down her cleavage. “Do you think you could give me a ride home, Zed?” she asked. She bit one finger in a nervous gesture, knowing he was buying it. “My friend went home with some guy and left me here. I can wait.”

His eyes flashed, and she knew she had him.

“Sure.” He glanced at the other bartender. “Give me a second. I got off an hour ago.”

Sure you did, she thought.

A few seconds later he was back, pulling on a t-shirt as he walked. The gesture was surprisingly human. With the demon hiding inside, the brimstone dancing in his blood would keep his body uncomfortably hot, eventually burning him alive from the inside out. It may be the middle of winter, but he would never feel the cold.

He held up his keys as she rose to meet him. “My truck’s out back.”

She moved closer, letting him drape an arm over her shoulder. “Let me grab my coat.” The duster was where she had left it. She draped it over her arms as she turned on her psychic link with Xavier. The mage accepted, and Brenna turned to the demon, knowing Xavier was watching through her eyes. At this point, the mark’s lust was so inflamed he wouldn’t notice the slight change of color in her irises.

Wrapping her free arm around Zed’s waist, she led him through the mass of patrons to the exit. As they stepped into the wintry air, she noticed the bikers again. They stood beside their Harleys, watching her warily as she passed. She worried the tension might give her away, but Zed was oblivious.

She led him over the cobblestone to where Xavier waited. As they closed in on the shadows, she could feel Zed’s eagerness spike.

The darkness moved over them, hiding them from prying eyes. Xavier’s power sang in the night, a compass pointing her to the van. Leaving Zed to follow behind, she moved to the gray van and pressed her back against its side. Zed moved toward her, all pretense of humanity stripped away. The graceless stride betrayed his hunger as green scales peeled away his skin and his eyes turned to blood red slits.

Brenna waited until he was on her, scales chaffing the sensitive skin of her face, then she dropped her glamour. The demon jerked back as her magic wrapped around his body, but it was too late. In one swift movement, she pulled the blade strapped to her back free and ripped the already tattered t-shirt away from his chest. Shifting her body weight, she slammed him against the vehicle even as his body mass grew, the demon pushing its way to the surface. One hand held Zed steady, the other slipped beneath his jeans to feel the skin of his hip.

“A little to the left,” the demon growled, body shaking, titillated despite itself.

He shifted his weight and slammed her against the brick wall behind her. His body pressed hard against hers, he ran a scaly tongue across her cheek. “You don’t have to get hostile, darlin’. I don’t mind if you like it rough.”

She let her power surge and kneed him in the crotch. Sparks flew as her spell sent him flying against the van. Keeping him in place with a holding spell, her fingers found the rune carved on his hip. She ripped away the denim as she tried to control the squirming demon.

“A little help?” she called out. She had pulled back the spell. Her full body weight was pressed against the demon, but he was starting to get free. Her magic had to be focused on breaking the possession; she couldn’t waste it restraining Casanova.

She released the demon as Xavier stepped from the shadows and slammed it against the van again. Subdued, the creature glared at them, its red eyes filled with hatred. Another hard slam dazed the creature, but only for a moment.

A flick of her hand and the back of the van opened. Xavier shoved Zed inside. As soon as he was strapped into the harness, Brenna ripped off his jeans. His hips now bare, she was able to see the rune carving, fresh as she had hoped.

Her ceremonial blade pulsed in her hand as she charged it with her energy.

Zed spit at her. The saliva sizzled across the corset, burning a hole in the leather.

Damn. That had been one of her favorites.

“Stuff something in its mouth. I need to concentrate.”

“Deal with it. Even in the harness this thing is a bitch to restrain.” White lines creased Xavier’s eyes, and Brenna worried his injuries were more severe than he let on.

Zed’s fingers began to work the trappings of the harness, but Xavier pulled him back, one arm around his scaly neck. In an explosion of power, Zed pulled free, knocking Xavier into the side of the van. Saliva dripping from his fangs, Zed growled at Brenna, and snapped the other wrist free. Jumping across the van, he pinned Brenna beneath him. Spittle fell from his lips, scorching its way across her skin. She pressed her palm against his face and pushed with all her strength, ignoring her burning flesh. Then, suddenly, he was gone.

Getting to her feet, she saw Xavier had strapped the beast back into the restraints.

“You got it?” Once she started, she wouldn’t be able to help him anymore. All of her energy would go into the exorcism.

A sharp giggle jarred Brenna’s attention. Looking up, she caught Hilda peering through the glass from the front seat. “If he passes out, I can help.”

Tuning them out, Brenna let the words of the exorcism spell spill from her lips. Her hand pressed against the rune on the demon’s hip. The carving glowed and the green light grew until it filled the van.

Zed fought against the restraints. Obscenities, the kind only a demon would know or understand, ricocheted throughout the vehicle.

Xavier stuck a thick leather strap in the demon’s mouth, cutting off his tirade.

Brenna gathered her magic. It pooled through her and into the athame as she sliced the silver blade into the center of the rune. Blood seeped from the wound, spilling over the green light. It exploded with power, slamming Brenna against the van. Xavier fared better, still wrapped around the demon. He was surrounded by a musty green steam that reeked of brimstone.

Continuing the chant, Brenna pulled a pouch of blessed sand from the crevice between her breasts. Throwing a pinch onto the rune, she banished the demon back behind the Veil. Golden steam rose from the wound. It twined around Brenna thick and dense, but she continued to chant even as its foulness tried to seep inside her mouth.

Darkness teased the edges of her vision for a few moments, then the warmth of Xavier’s power wrapped around her body like a shield, pushing out the demonic essence. Time stood still as the final words filled the air. Then, in a flash, the beast was gone.

Angela Dennis lives outside Cincinnati, Ohio with her husband, son and a sheltie with a hero complex. When she is not at her computer crafting stories, she can be found feeding her coffee addiction, playing peek-a-boo, or teaching her son about the great adventures found only in books.