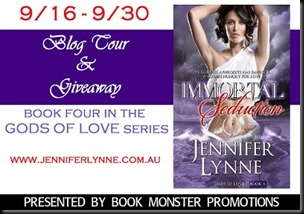 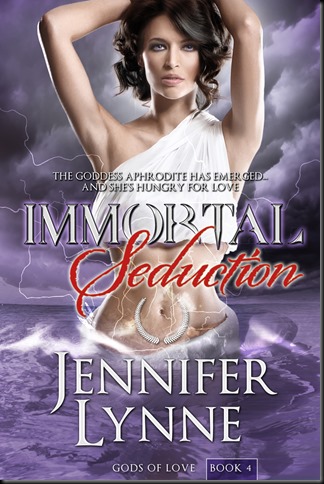 Some seek love, some seek power. For Aphrodite, the two are permanently intertwined. And when the goddess of desire yearns for love, who among mortals could possibly resist her power?

Firefighters Ashur, Kieran and Hugh are damaged men. A tragedy that took the life of their colleague has left them scarred, both physically and emotionally. Love and power are nothing to them but empty words.

Hoping to reignite their mother’s passion for life and love, the erotes bring these mortal men to Aphrodite’s attention.

But with the blackness inside Ash, Kier and Hugh becoming ever deeper, will it take more than the power of a goddess to save them? And if she loses that battle, how will she rediscover the path to healing for her own emotionally damaged heart?

Before Immortal Seduction there was Gods of Love (Books 1-3), available either as individual eBooks or in a cost-saving series bundle (print or eBook) 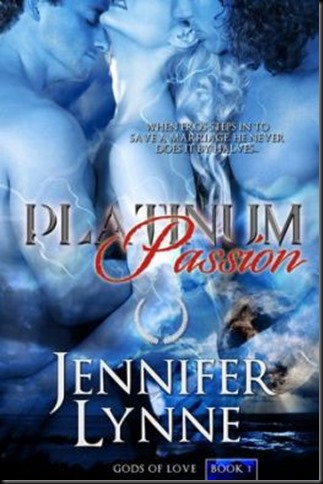 BEST BOOK OF 2011 Nominee in GLBT FANTASY ROMANCE at The Romance Reviews. 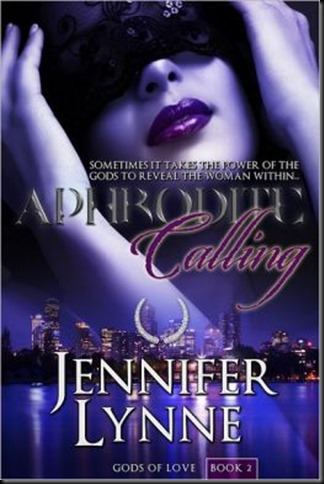 A woman with a secret past

Thirty-two year old Gina is forced to confront her fears when she attends a high school reunion. Born into a male body, she spent her childhood and teen years living as a boy, and she has only now returned in an effort to put the past behind her so she can begin to live life without the continuing fear of loneliness and rejection.

A god of sexual desire on the edge of burnout

Himeros is one of the erotes, an aspect of Eros, and as such it is his duty to answer the call of sexual desire whenever a human needs him. But he has been living among humans too long and his energy has waned. When he decides to accept one last call he finds a woman who is unique. A woman who answers his own call and offers everything he desires. A woman who understands the whole human experience, from every perspective. Has he finally found the one with whom even a god of desire could find fulfilment? Forever, after all, is a long time to be alone. 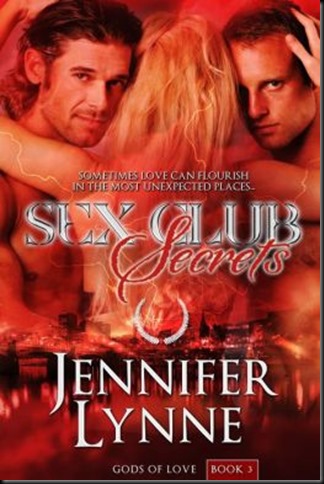 Sometimes love can flourish in the most unexpected places…

Ella is in love with her best friend Kade. But her love has not been returned, and when bisexual Kade shows no signs of becoming romantic towards her, she decides to call a halt on her unrequited love and accept an invitation to a celebrated sex club.

Kade is distressed when the woman he is beginning to see as more than a friend decides to visit Secrets before he can tell her how he feels. He follows her into the club and witnesses her at play with the enigmatic Anteros, a sexy god-like man who seems to know exactly how to satisfy her innermost cravings. But Anteros also feeds the hidden desires within Kade. How can he admit his feelings for Ella when he’s not sure he can commit with his whole heart?

Anteros is one of the erotes, an aspect of Eros and the ancient Greek god of requited and unrequited love. He has heard the call of these would-be lovers and intends to show them that friendship can sometimes be the best place to kick start a lasting romantic relationship.

But love cannot flourish unless it is returned, and how will he convince Kade – a man who occasionally enjoys other men – that he can be true to the woman he loves? What will happen to this couple when the night ends and they return to the real world outside the door of Secrets?

Has one of the gods of love finally taken on a challenge he cannot fulfil? 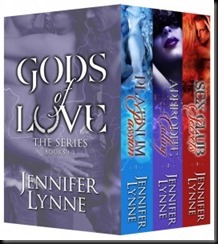 Together for the first time in one collection, the first three novellas in the GODS OF LOVE series:

A night of ménage a trois passion will change three lives forever. Jeannie and Jake's platinum anniversary becomes an unforgettable experience when Pothos, god of sexual yearning, steps in to save their twenty-year marriage.

A god of sexual desire on the edge of burnout meets a woman with a unique and secret past…In the arms of transsexual woman Gina, has Himeros finally discovered the one with whom even a god of love could find fulfillment?

Buy the bundle in digital format

Buy the bundle in PRINT

Jennifer is giving away a $15 Amazon GC and a swag pack including bookmark, Gods of Love cover flats, pen and a cute koala bear crystal charm for mobile phone to ONE lucky winner at the end of her tour: 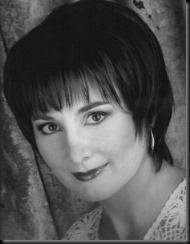 Find Jennifer on the web at: