Book Blitz and Giveaway: To Steal A Highlander’s Heart by Samantha Holt 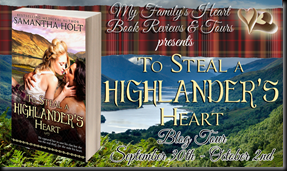 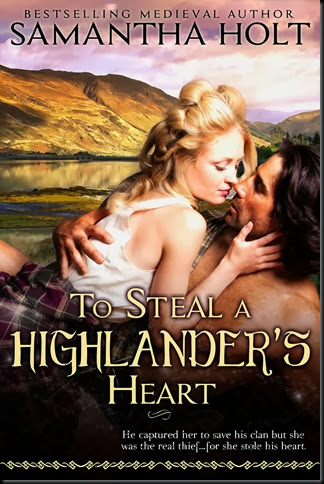 Title – To Steal a Highlander’s Heart

Alana sets eyes on Morgann for the first time in several years and what does he do? He captures her! But Alana refuses to go meekly with the sexy Highland warrior. Her kidnapping will reignite the rift that’s existed between the two clans since her father accused Morgann of theft and she doesn’t want to see her father harmed in the inevitable war that will ensue.

Unfortunately for Alana, the faeries seek to interfere with her plans to escape. The sidhe have a debt to repay and Tèile, the green faery, is determined to mend the rift between the clans for good. And that means ensuring Alana and Morgann marry.

Morgann has his own reasons for taking Alana and they are nothing to do with marriage or war. He wants to use her to reveal a secret from the past, the one that had him accused of theft. If only he didn’t find his childhood friend so attractive. When circumstances force them together, Alana’s life is threatened and war is imminent. Can Morgann reveal the truth without losing Alana? And will the faeries meddling help or hinder his cause?

“Will ye cease fighting me if I explain?”

The hold around her hands released as he watched her closely. But she knew better than to fight him. It didn’t mean she’d stop trying to escape. Nay, she just had to choose her moment more carefully. The warrior was obviously determined to take her.

She made the mistake of holding his gaze as he made to climb off and her chest tightened. He paused and they stared at each other. Emotion simmered behind his gaze, the anger gone, and Alana couldn’t tell if the emotion was targeted at her or something else. All she knew was the feeling of having his strong weight on top of her, his gaze boring into her, stole all sensible thought and turned her into one quivering mass of sensations.

Endless moments stretched on as she waited for Morgann to look away, to break the connection, but he stared brazenly on as his gaze trailed over her face. What did he see? As she gaped up at him, the irate warrior dissolved into a flesh and blood man and she recalled how much she used to adore him. When Morgann was banished from her father’s lands, she’d been heartbroken at losing her friend, but with the blazing sensation of having him flattened against her, she remembered it wasn’t just the loss of his friendship that hurt her so. She’d always silently hoped Morgann would play a bigger role in her future.

But that didn’t change the fact he was taking her against her will and she would not go meekly, regardless of what she once felt for him. She wouldn’t put herself and her clan in danger all because they’d once been friends. If only she could ignore the sensuous pull of his lips or the darkening of his pupils as a rough finger drew a path over her cheek.

A crack ripped across the sky and they both jolted. Pushing to standing, Morgann helped her up and grimaced as he eyed her. Aware of the mud coating her, she swiped a hand across her face as her cheeks heated. Tilting her head up, she hoped the rain would at least be useful for something and not only rinse away some of the dirt but also cool her down. The way the man made her skin blister was extremely disconcerting.

Morgann muttered a curse, drawing her attention back to him as he raked a hand through his hair and yanked some rope from the leather pouch hanging from his saddle. As he turned back to her, rope held out, Alana shrank away.

“Ye cannae mean to tie me up, surely?” 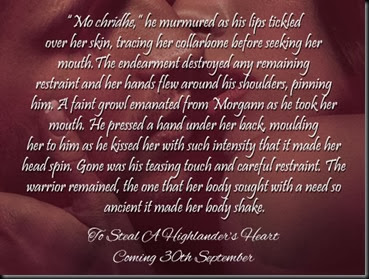 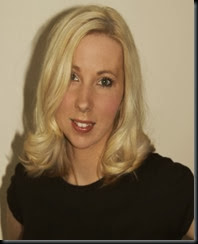 Samantha resides in Warwickshire, England with her twin girls and husband. She's a romance addict and has been devouring all kinds of romance for as long as she can remember.

Having studied archaeology, Samantha likes to blend her love of the past with her passion for romance to create thrilling and passionate tales set to medieval backdrops. She thinks there's nothing sexier than a rugged warrior and a feisty maiden falling head over heels for each other.