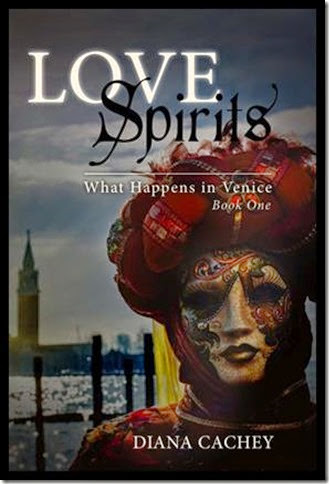 What Happens In Venice

Tagline: Among the romantic canals of Venice—and oh so many Italian distractions—can a stunning American lawyer and her psychic sister help the Ghosts of Venice solve a hushed-up crime?

Louisa Mangotti is a gorgeous American lawyer and Interpol expert who, after being offered a job working with the international crime unit in Venice, receives a mysterious postcard from the Venetian Ghosts, the ancient protectors of the Republic. But Louisa assumes her bad-boy ex, Matteo, sent it in a quixotic attempt to gain her attention. Louisa may have dismissed the ghosts, but the ghosts aren’t quite done with her.

When the bodies of two glassmakers wash up on Murano Island, the cryptic messages persist. Reluctantly, Louisa calls upon Matteo to help decipher the clues. And before she knows it, a flame that was never fully extinguished is rekindled. Sensing that her sister is in over her head, Barbara Mangotti rushes to the rescue, only to be lured away by two handsome Venetian men.

With time running out, can the two beauties solve a crime that could threaten the city of Venice itself?

What Happens In Venice -- A Trinity

Venice kidnapped her. It stole her breath, it made her weep, and she forgave it. This trip was no different. Palazzos flanked the Grand Canal as if playing the role of soldiers obedient to the eyes of tourists who passed in public boats, water taxis and gondolas. These old palaces sparkled on water like porcelain figurines on a glass shelf. A soft breeze rolled across Louisa’s cheeks and it rippled the reflections and transformed the scene. Mesmerized by the magic, Louisa missed her boat stop. No problem, she thought, I’ll find another place for coffee. She refused to drink it alone in her apartment and religiously sipped her brew at one of the little cafes where handsome Venetian men worked. There were many such establishments on her way to police headquarters. When she arrived a few weeks earlier, American lawyer Louisa Mangotti hoped to spearhead the creation of an essential link between Venice police and the rest of the world. But was she leading the department into the future of global law enforcement as she’d envisioned? No, she sat shackled to a desk where she sorted and translated police data because Interpol sent red alerts and formal requests for information in English or French, not in Italian. Therefore, many unsolved crimes remained ignored in the file drawers of the lagoon city, a thriving metropolis and huge tourist destination. And Louisa? Louisa remained bored in a cubicle learning about law and disorder. According to recent updates to her sister, Louisa was focused on everything but international law enforcement anyway:

Ciao Barbara, Remember that lagoon island said to be full of ghosts where patients with the plague were once sent to die? Well many other haunted places exist in Venice too. I don’t believe in ghosts, not like you do, but I am checking out some haunts. I am checking out Venetian men too.

Because Barbara objected, Louisa promised not to explore the haunted island. But didn’t Barbara object to Louisa going to Venice at all this time? Wasn’t it just like Barbara to try to direct everything, even from afar? How much of the seemingly haunted happenings in Venice could Louisa ignore? Blame the postcard, thought Louisa. And as she thought it, a loud bell rang out. Louisa took note. In Italy, it is customary to pause and recall whatever you were thinking when a bell chimes, especially this bell, the one that echoed from the famous bell tower, high above St. Mark’s Square. The massive San Marco bell continued to sound in the serene setting, bang, gong, gong, bang, and it reverberated across the piazza, across the lagoon, to the nearby islands of Murano and Lido. It sounded authoritative and mighty. Every day. For centuries.

Yes, I was born to write. But I sold out, became a lawyer, which is really a highly paid different type of author, one who writes legal arguments for courts. I published academic papers as a student, was chief editor for the law review and  clerked for an appellate judge where I drafted court case opinions for her, so it was always in my blood, even in the law.

When did you first consider yourself a "writer"?

Probably as a teen when I first started to write poetry and short stories.

I like to say it took seventeen years for Louisa, my main character in Love Spirits, to get to Venice,  the romantic setting for these novels. I started putting pen to paper in the novel format in 1997. Once I started writing full time, it took four years to write the three books of the What Happens in Venice Trinity.

I’ve been a Colorado attorney for twenty years. I'm a litigator, which means I'm a trial attorney. My favorite is criminal law, it's so television,  you know what I mean? I've both prosecuted and defended suspects in drug busts, drunk driving,  domestic violence and gun cases.  I also love class action lawsuits and medical malpractice - fighting injustice for the little guy.

LOVE SPIRITS -- What Happens in Venice: Book One.

Amongst canals and romantic suitors, can a young lawyer and her psychic sister help Venetian Ghosts solve a hushed-up crime?

I'm indie pubbed (as it's starting to be called) because I wanted more control,  royalties and online longevity. It's not for everyone - it is a lot of work - and you never have full control over anything in this business. I’ve screamed, cried or had full-on meltdowns during the publishing process, regularly. Whichever route one takes, remember to breathe. Always breathe. Deeply.

Two years after many drafts, edits, more edits then polishing it to a shine and this doesn't include final review of the printed proofs.

Besides the second and third books of my What Happens in Venice Trinity, I've already started a new book set in Venice that involves the same characters but a new ghost and a different mystery to solve. I also started a science fiction time travel story, which will feature another strong female lead character.

I love to read mysteries, romance, suspense and anything in the supernatural arena. Naturally I gravitated to those genres when I began my novels. Love Spirits is a mix of these genres.

Any of the handsome Venetian men whose charms are irresistible to the women they woo. Because of these winning ways, my female characters have the best sex and much romance.

How long have you been writing? and who or what inspired you to write?

I've written poetry and stories since I was a child.  The city of Venice inspired my novels!

Go in room, shut door, meditate for at least 11 minutes, stare at computer until words appear as first sentence of the day. Do not leave room nor open door until 2000 words are written. Repeat as needed until the laborious first draft is born.

I really don't want to read reviews because I'm frightened of them and think criticism can be not only mean but inaccurate. However, I've been fortunate to get great reviews, people even saying it is a bestseller in the making. I wish! Who wouldn't want to read that in a review? I'm very grateful for anyone to review it. What an honor to be read, and commented upon, no matter what is said.

The title evolved from a long brainstorming process with writers, mastermind groups and coaches. I also gave my favorite choices to everyone to get opinions and votes. Then a flight attendant en route to Venice said, "What Happens in Venice" and we all went "yes!" Therefore, the title for What Happens in Venice: The Trinity evolved while I wrote the books, but the titles for the separate volumes, Book One - Love Spirits, Book Two - Lagoon Lure and Book Three - Magic Island were decided after they were written.

For my books set in Venice, the muse picked the character names for me. The Venetian muse of ghosts, that is. They floated down to me it seemed. As for the place names, I've been to every location in Venice mentioned in the novel so those names are real places. For fictional spots or places, I invented evocative names for each.

Some were birthed immediately, right on the page, I guess from the ghosts, so thank you, Venetian Ghosts. Others I tweaked if I thought they needed to be spicier, shier or more comedic where a scene or interaction would require it.

Go for it! Follow your heart, travel, be adventurous,  then the universe will reward you with more ... In mysterious ways.

I travel frequently and pack light but haven't gone all "E" so it's paperback. Smaller is better.

Wuthering Heights was the first novel I couldn't put down. Ah romance! When I read Steven King's first novel, Carrie,  I Was In Awe. Still am, as a matter of fact and could read it every year, for Halloween, of course.

What a great question. My answer is ... it depends. If an author is fully involved or writes the screenplay, they turn out better, like Steven King's horror flicks or the Harry Potter series.

Pasta or pizza. Was there ever a doubt?

The Rolling Stones, just like Louisa, the protagonist of Love Spirits.

A rainbow, no, make mine a double. 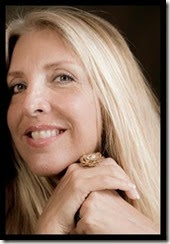 Diana Cachey is a licensed attorney, published academic, and former adjunct law professor. She also holds a BA in English, and while in law school, she was the first female editor in chief of her university’s law review. The author of the novel Love Spirits, she has trained with several New York Times best-selling writers, including Robert Allen, with more than seventy-two million books sold. For more than a decade, Cachey has been traveling to Venice, the setting of her novel, on extended trips several times a year. The cafés, restaurants, and many other haunts of Venice play a prominent role in her sexy paranormal mystery-romance about a beautiful American lawyer guided by the Ghosts of Venice in the investigation of a hushed-up crime.