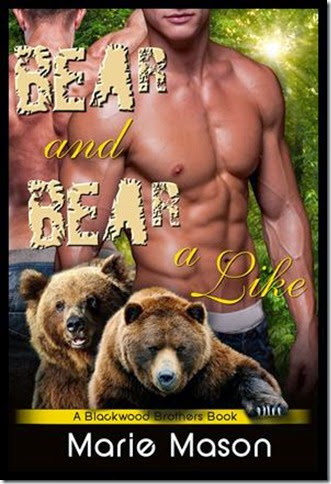 Ryland and Ryker Blackwood were twins. Identical, thigh clenching bear shifter twins who had no trouble getting women into their beds. Or bed. They’d shared just about everything in life, even women.

The scent of the cat shifter they found on their construction site was driving both Blackwood brothers crazy with lust. Or was it? Every time they thought they were getting closer to finding the woman who would be their mate, one of their bears backed away. The hot and cold feeling they were getting from their animals was confusing the shit out of them.

Was the cat shifter meant for one of them or both of them?

They were mates, but mates who knew almost nothing about each other. Ryland knew better than to rush her, so he eased into the kiss, tilting her head and aligning their mouths. His bear huffed at each hitch and shudder of her breath as he deepened their connection. His senses were attuned to every subtle movement her body made in response to his touch and he gloried in the shiver that ran though her and the softening of her body as she gave into her needs and leaned into him.

He finally gave into the temptation and swept his tongue into her mouth to taste. He sipped at her mouth, letting the flavors of his mate collide on his tongue, ensuring that he would never forget her. He’d thought he’d known what to expect. Strength. She had that in spades. Caution. Sweetness. Innocence. Passion. Orange blossoms and honey. Her taste exploded in his mouth.

The heat grew with each velvet slide of his tongue over hers. He smiled into the kiss when her hand rose and fisted in his hair. He obeyed the command behind the gesture to deepen the kiss, to drive them both a little crazy, and closer to the edge. The edge of no return where he took his mate, fucked her wet pussy and branded her as his.

She offered no resistance as he plundered her mouth. He thrust his tongue between her parted lips and took what he wanted. He licked at the roof of her mouth, skimming the along the row of her teeth before dipping down deep inside again. Finally, her tongue came out to tangle with his.

Emma knew she would soon be a goner. The feel of his mouth and tongue was doing wonderful things to her body. Her pussy moistened and her nipples pebbled and hardened. Goodness, how she wanted him. And she couldn’t have him. She tried to ease away, to break off the kiss but he growled and she sank back into his heat.

Why couldn’t she have this moment? This night?

Body shaking, she pulled back from the kiss. Kiss, huh. That was too tame of a description for what they had just shared. His lips were wet and moist, and redden. She knew if she looked in a mirror, hers would look the same. She licked her bottom lip, her tongue finding the slight cut where he had scraped it with his teeth.

“I, umm.” Not only did her legs feel like wet noodles, but her brain was fried from the heat of their passion. Ryker’s smile was smug. No doubt he could smell the arousal he’d created as well as see the effect of his touch. Her eyes were dilated and her body was shivering. She wanted him and he knew it. He continued to smile as he ushered her up the stairs. Two more flights and they were in front of the apartment.

Marie Mason has loved writing and reading her whole life. Everyone knows when you start to hear voices in your head, you’er destined to be admitted to the nearest mental ward—or become a writer. Marie decided to become writer instead of waiting for the men in white coats to come carry her away. She loves books about alpha males and especially alpha males who just happened to be a demon, wolf or a bear.