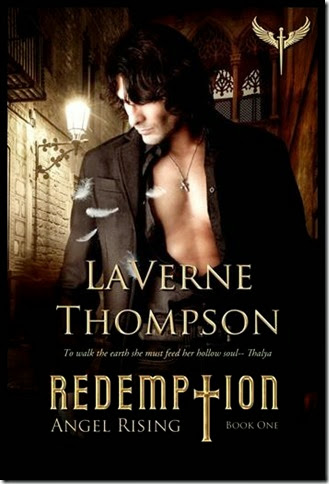 To walk the earth she must feed her hollow soul.

Some of the most beautiful people in the world are not human they have no soul. They feel no emotion and are pure evil. You can tell by the color of their dark dead eyes. Samuel Glaus knows this. He is after all half-human, the son of a human mother and soulless father, and a hunter of the soulless. He is also in love with one who cannot love him back.

Thalya is a soulless creature, but unlike others of her kind she does not kill to feed her hollow soul. She hungers for emotion and above all she hungers for Samuel’s love. Her enemy. Her redemption. And she’s willing to kill for it.

Opening up her senses, she sniffed out the most depressed in the city block around her. While she had no human sense of smell, the scents of emotions to her were as potent, as humans would say a bouquet of freshly cut roses.

Right across the street a man entered the park. The scent of his depression floated right to her on the wind. Hot, potent and yummy, she would feed on it for a few days. There were no others of her kind in the area, so she wouldn’t have to warn anyone off. Although, quite a few soulless resided in New York, the size of the area ensured she didn’t run into others if she didn’t want to, which she usually didn’t.

Going back inside her penthouse condo, she walked across thick sand-colored carpet. Her artist friend, Franklin, would have both loved and hated the great room. Loved it for the cool colors—reds, beiges, and golds. Those had been his favorites, but then she’d stuck a long, extra-wide black leather sofa smack in the center of it. He hated leather and black.

Franklin, long gone…just another from her past.

She put on her long coat, and headed for her private elevator. She didn’t need it but she wanted to blend in. Tonight she would act normal. Normal, at least for a human. As an additional benefit, when she walked through her lobby to get to the street, she would open her senses to her immediate surroundings, sampling a taste of surface emotions as she passed by.

Not all of her kind could suck out emotion without touch but as an olden, one from a time long past and more powerful than most, she could. But other things also set her apart from those like her. She did not need to kill her providers or have them kill others to satisfy her needs. Draining humans of their depression, her emotion of choice, more than satisfied her. Humans carried it in abundance. She merely put her providers to sleep and afterwards, they usually woke up feeling less depressed. Hers represented a more symbiotic relationship. She actually helped people, much like a psychiatrist would. Only, instead of talking them out of their depression, she drained it right out of them.

The elevator door opened and she got on.

The hotel where she lived also housed private residences, but a few guests milled around the lobby for the evening. Just enough people around with some serious issues to make her grin and tremble within her ankle-length leather coat.

“Delicious,” she purred. Red knee high stiletto boots clicked as she crossed the polished marble floor. She ignored the appreciative looks of the men and women as she glided among them, intentionally projecting a do not approach compulsion. Look but don’t touch, unless she was the one doing the touching.

The doorman opened the door for her and smiled. “Good evening. Cold one tonight.” Bundled in layers and with a wool cap on his head, he stood directly beneath a heating vent to stay warm.

He always spoke. She rarely did and tonight, she didn’t. She flashed him some teeth in the semblance of a smile. At least she hoped it looked like a smile and not a grimace. Happiness. It rolled off him in waves. She’d never tried draining that emotion from her providers, although over the centuries she’d met a few of her kind who preferred it. Anything to fill the void in the soulless place. But stealing someone else’s happiness always seemed unnecessary to her. Depression worked just fine.

Out on the sidewalk, the scent hit her again. Like a shining point of light in dark woods, the depressed man she’d sensed beckoned her to follow him. After crossing the street, Thalya entered the park. It didn’t take long to find him.

He sat on a bench at the other end of the park, leaning over with his head in his hands.

She wouldn’t be able to read his thoughts until she actually touched him. No matter, she sensed his depression.

She sat on the bench next to him; he didn’t even bother to look up. Thalya placed her hand on his shoulder and her inner feminine muscles contracted to the point, she almost had an orgasm.

Depression, and so potent.

At her touch, he raised red-rimmed eyes in her direction.

Finally, she had his attention.

He pulled back slightly, some form of self-preservation kicking in. “Who—are you?”

“Shhh. It will be all right. I promise,” she whispered.

The man sat up and she wrapped her arms around him.

Unable to help himself, he let her.

Hmm, handsome. She always seemed to gravitate toward the young, good-looking ones, although she’d never sleep with any of them. Well, hardly ever. She nuzzled the side of his neck. Under the alcohol he’d indulged in, he exuded a nice clear human scent. Given his emotional state, she’d expected the scent of alcohol to be stronger. Surprisingly she only caught a slight whiff. No more than a beer. Maybe he just started on his drinking for the evening. Didn’t matter. Whatever he’d ingested, she didn’t care about.

She didn’t give him a chance to say more. Instead, she made her way to his mouth, which opened as soon as she pressed her lips against his. Unleashing her powers, she inhaled his depression into the starving emptiness that should have housed her soul, and at the same time, began to read his memories.

Poor thing. Karl, yes…Karl Hammer. He’d recently lost his job and his wife, pregnant with their first child, didn’t know about it. He’d swallowed his pride and asked his blood uncle of sorts for help. Except Karl hadn’t spoken to his uncle in years. Mmm, interesting. She probed for the reason why.

Samuel and the others like him lived a dangerous life. Samuel, a master hunter of the soulless and Karl, merely—bait.

Character Bio: I was born at the birth place of time. I have no clear memory of my beginning only that I was and I am. I am a soulless one. You see I have no soul thus feel no emotion. But I do have a driving need to feel. I seek above all else this need to fill that void deep inside where a soul should reside with emotion. I have traveled the earth searching for depression, my emotion of choice. With but a kiss I drain depression from unsuspecting humans. But I do not kill them. There is no need. So while I sate my blinding hunger it is never quite satisfied…until Samuel. The one who hunts me. I have no best or worst quality but I am sure a human would value the fact that I do not kill them to feed my hunger, nor am I the cause of their depression. And perhaps the cure. When I am done I drain the depression right out of them. So I am sort of a helper if you will, helping them get over that emotion, get rid of all that negative energy and all free of charge.

I find myself suddenly hungering for Samuel’s blood.

Suddenly I know this emotion. That I will take blood from Samuel and drain him.

I’m one of the oldest of my kind. They don’t bother me and I don’t bother them. I leave the foolishness for the young. But I will rise to the occasion.

Now there is an emotion I stay away from.

The painting a deceased lover did of me. He painted me as if I had a soul.

I take my emotion with a kiss. Others of my kind take in other more violent ways.

I don’t like or not like anything but I do think that my kind killing humans to drain their emotions is unnecessary.

I cannot despise anyone or love anyone for that matter.

Men with depression draw me like a moth to a flame but for some reason Samuel’s lust consumes me like nothing else I’ve know. How strange.

That she be depressed. I can cure her of that right fast.

I don’t read much I’m more visual. I do watch some television and well, I find Aidan Waite interesting from Being Human. And so little interest me. Hmmm isn’t it a coincidence his name in real life is Samuel also.

If I could admire anyone it would be Adam. As old as I am he is even older. And dude has more power in his little finger than anyone I know.

I would want a soul.

Leave me be and I will let you live.

She is currently working on several projects. Both of her daughters are now away at college. However, she and her husband don’t like the term empty nester. She’s added a cat to the household to keep the dog of the house company. Hopefully writing will keep her sane.