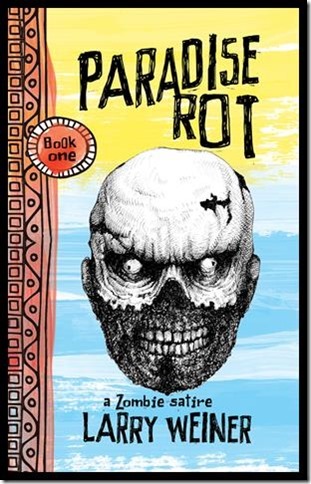 Kyle Brightman—late of the advertising industry and soon-to-be-late of the 5th floor psych ward—has a job offer he can’t refuse. A new resort in the Caribbean is looking for an art director.

Kyle soon finds himself on the Isle of St. Agrippina working alongside a beautiful copywriter with an icy handshake. Questions arise: Why does the resort management team sport spray-on tans in the Bahamas? How can the resort offer such cheap vacation packages? What does one do with vats of Astroglide?

To get the answers, Kyle must first navigate a series of wildly unpredictable events with a cast of even more wildly unpredictable characters, including a seductress jungle assassin, her partially paralyzed talking Chihuahua, an Ivy League Rastafarian seaplane captain, Kyle’s ex-psych ward roommate, a former Haliburton mercenary, and a French tavern owner with a fondness for goats, all set to the greatest hits of the 70’s. Pablo Cruise never felt so right.

“THERE’S A REASON WE PUT PATIENTS IN RESTRAINTS THIS WAY,” Hap the orderly explained. “See before, when it became necessary to administer a four-point restraint on someone, we’d just do the standard two feet to each side of the gurney and two wrists by the waist. Now we have you done up with the POS 2206 restraint which you’d have to pretty much be motherfuckin’ Houdini to get out of, see what I’m sayin’? We got one arm up and one down so you don’t pop your shoulder out of your socket. Does that matter to the average whack job that comes through here all spun out screaming about the end times or how the government implanted tiny computers in their heads? Nuh-uh. They just keep wigglin’ around as if their super human powers are gonna set them free. Forget it, son. Your body belongs to the St. Eligius psych ward, fifth floor, Seattle, Washington, in these United States of America.”

Kyle Brightman lay restrained on the gurney looking something like a flamenco dancer striking a pose horizontally. Unlike flamenco dancers and their elaborate sequined outfits, Kyle was in jeans and a faded Clash T-shirt covered in eggs, tapenade, and mace. Also unlike flamenco dancers, Kyle had been tased in a supermarket. But then it had been a weird week in an off kilter year, so in retrospect it seemed fitting to be held down to a gurney in a hospital corridor getting a lesson in the history and technique of human body restraint from Hap, the large African American orderly schooled in human confinement arts.

Kyle fully submitted to the restraints, finding them rather soothing— Temple Grandin was on to something, he thought. He also thought about the starting place on the long road of his downward spiral: from being fired from his advertising gig as an art director, to mowing the grass for a local golf course, and finally to freaking out on a couple of elderly women blocking the aisle in a supermarket because they wouldn’t move their carts a few inches over when he’d asked.

All in three months’ time.

In truth, the brain lock up had been a long time coming. A bitter divorce that had cost him his waterfront condo and his cat, Lester. The passed over promotion at work to a younger junior art director. The diagnosis of Bipolar II. The drinking. The petty shoplifting at the local Rite Aid. It was a perfect storm of anxiety and neurosis crashing down upon an already paranoid and erratic man with authority issues and a tendency toward drama.

But the idea of his mental state as a tornado gathering energy as it swept across his life was nothing new to Kyle or those around him. His moods were a dangerous balancing act of wit, anger, and a general cluelessness that on the best of days came across as mercurial.

He knew this about himself, and though countless therapists had talked him through his childhood, his mother, his school years, and subsequent launch into adulthood, everybody had yet to find a cure. As a creative director with similar tendencies had once put it to Kyle, he’d best learn to be an asshole with serious repenting skills if he was to survive at all, let alone in advertising.

In Kyle’s mind, every time he met a woman, took a job, or made a friend, he imagined a stop watch starting, ticking off the days, hours, minutes, seconds until eventually they would learn the truth about him: that his moods were like forecasting the weather. It was a seemingly mundane twist of fate then that Kyle Brightman would completely lose his shit because two aged, upper crust cronies wouldn’t move their shopping carts over enough for him to pass. If only he had known what they had been discussing (the cost increase in septic pumping/ whose Mexican gardener was better) he might have picked a more symbolic moment to melt down. But then, he had realized as he began cursing at the top of his lungs that he really wasn’t in the driver’s seat. And when he began to throw eggs at them, followed by a jar containing tapenade while knocking over a display rack of various energy bars, it became clear that he was now entering new territory.

Territory that would require restraints.

“When do I get out of the restraints?” Kyle asked Hap.

“That depends on you,” Hap said. “If you cooperate and let us do our job and you do yours you won’t see restraints again. But if you start to go sideways, we put you in the metal room, hose you down and go to work on you with rubber Billy maces.”

“I’m fuckin’ with you. You’ll be fine. We’re gonna take you to your room. You’ll meet your roommate and we’ll get you on the road to recovery.”

Kyle hadn’t thought about recovery until it was mentioned. It was a rare instance that he lived in the moment. He was aware, strapped to the gurney, that he was extraordinarily tired.

“What if I don’t recover?” Kyle asked.

“You will,” Hap said. “I been doing this a long time and I can tell the ones who are gonna make it and the ones who fall through the cracks. You’re the first one.”

“What do you tell the ones who you know are gonna fall through the cracks?” Kyle asked.

Worst? Self centered and impulsive without a filter and always taking the opportunity to defy authority. Best? Loyal to a fault, empathetic, honest and funny. How can you describe someone with just one word, right?

That I have a thin skin and seek to please others. Did you say one thing?

I like playing with Polly Pockets dolls. Kidding! I wish I were a true rockstar.

Not seeing the world and dying young – what’s the difference?

Currently in love with an undead woman.

I’m the guy in the faded Rush t-shirt, jeans and Chucks. The hair looks like a weather pattern.

I defy authority with a vengeance at every opportunity.

Um…huge penis? Wait I’m hetero. Uh, a sense of humor about himself.

I know the proper PC answer would be their brain, but I’m gonna have to go with big breasts (that’s a line (paraphrased) from a movie – guess which one)

“If the wind will not serve, take to the oars.” 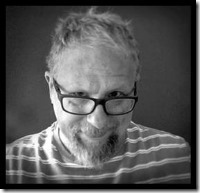 Larry Weiner is the author of PARADISE ROT (BOOK ONE), ONCE AGAIN, WITH BLOOD (BOOK TWO) and the forthcoming HINDU SEX ALIENS (BOOK THREE) that make up the Island Trilogy. Larry earned a degree in film from CSULA and was an award-winning art director. He lives on an island in the Pacific Northwest with his wife, two kids and a gaggle of animals. He plays bass and thus has poor hearing.

Visit his site at: http://www.larrynweiner.com