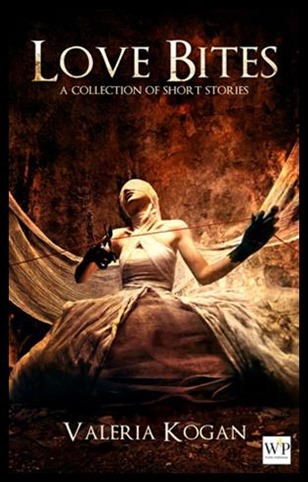 A Collection of Short Stories

Love Bites is the debut collection of short stories by Valeria Kogan. From heartbreak to redemption, Love Bites provides a spellbinding interpretation of love and friendship, glamour and guilt, secrets and deceit. Each story provides a captivating insight into the world of love; its profound impact and effect; and how women relate to their partners.

This cleverly constructed collection of short stories will leave you tantalized and yearning for more.

As a faded coastal town, Llandudno was an apt place for misery; once standing proudly on the northern Welsh beaches, it corroded slowly from its Victorian splendor to become a town populated by those who remembered it in better days, and those who were too tired to leave. Or at least people who could not find the opportunity to do so. It was a town filled with nothing but second-hand stores and bars, which waited in their bland decor for the weekends when they would be filled with drunken teens and women past their prime, maybe an unromantic version of those one-horse towns everybody talked about. Naturally, when somebody exceptional lived in a place like this they were easily noticed.

Carla was not only noticed, but was also resented by many; leaving for university was almost unforgivable in the eyes of some of her school friends, who secretly understood that she possessed a methodical charm that they would never master. Of course, it was never phrased that way; usually, just accusations of thinking too much of herself, or believing she was better than the people surrounding her. She was not necessarily the most beautiful girl, but she had the air of a fictional character in a black-and-white photograph; somebody invented and immortalized, but fleeting. There were things that people remembered her for: the fluorescent blue cigarette holder she used, with crystals around the tip (an exercise that took far more time and patience that it deserved); the silver charms on her bracelet. Her mother had bought the bracelet on the day that her first pet died and, every year on the same day, it would gain a charm and her eyes would be tinged with red. Naturally, such superficial things could never define a person, but it was what near-strangers associated with her, so these objects unwittingly became part of her identity.

Their sole respite came when she returned happily to her hometown after finishing her degree, determined to carry on living in what she saw as idyllic tranquillity, far away from the sprawling mess of Manchester and its endless strangers. This, however, did not last long. She brought with her a husband, a man who complemented her with contradictions. It seemed that not a day went by when they were not seen walking hand in hand and talking incessantly, furrowing their brows when topics carried far too many syllables for eavesdroppers to convey to gossips, or simply laughing. All theories on their fast, young marriage were negated when it turned out that she was the wealthier of the two, and her stomach did not swell as time went on.

What is the name of your book, and if you had to summarize it in less than 20 words what would you say?

My book's called Love Bites, and I guess I'd call it a realist's version of romance. It's a love that changes people, hurts them, overwhelms them, and how people deal with that.

Do you have a favorite story from your books? And why is this your favorite?

I think my favourite is Barren. Like anybody else, I like to read about triumph and a happy ending, especially when that involves art (my other passion).

The places are generally places I've been myself so I already have a picture of what it feels like. I often build stories around a memory or a thought in that place and then go from there. I think that makes it a little easier to make them vivid, rather than starting from a completely blank canvas.  Llandudno, which is the setting for the first story, is actually the town next to where I grew up. Other bits are set around London, or the South East.

Do you decide on character traits (i.e. shy, quiet, tomboy girl) before writing the whole book or as you go along?

I usually start with the character. I don't think I've ever really got halfway through and then added a trait to make it fit - I'd rather change where the story is going to fit the character.

Are there any hidden messages or morals contained in your books?

I think the overriding message is that perfect love stories don't really exist; people are flawed, relationships are too, but that doesn't detract from them. If anything, it makes it more special since the chances of two uniquely flawed people finding each other and building a life together out of nothing at all is far more romantic to me than two perfect people being fated to be together. That almost just seems like autopilot.

What is your favorite book and Why?

Have you read it more than once? I read my copy of The Picture of Dorian Grey so many times it completely fell apart so I'm now on my second version. I re-read Fight Club whenever I'm in a bit of a rut. I actually finished reading Night Circus and then started from the beginning again right then and there.

I definitely revisit my favourites but I'm afraid I don't have a single favourite. There are just far too many to choose from.

My favourite cuisine is Russian, possibly because I eat it so rarely. I love some borsche with pierogi and then some vareniki with cottage cheese. And some blinis to finish.

Black. I never really outgrew my goth phase, I'm just a little too lazy to keep up with the clothing now.

Valeria Kogan was born in Russia and moved to the UK in 1991, where she developed her love of art and literature.