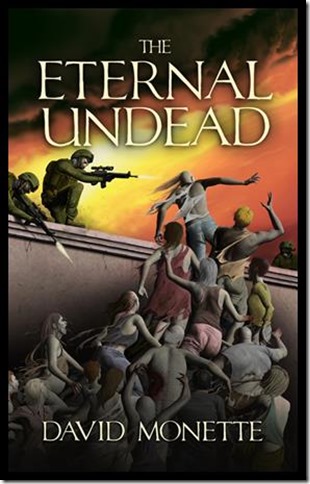 In the Time of the Dead

They thought they had escaped.

The battle for Washington DC is behind them, and the last remnants of the human race have fled from their undead enemies to a remote Caribbean island where they try to salvage what is left of humanity. But even here, the zombies have come. Led by the architect of the holocaust, an invading army wreaks havoc trying to acquire the one thing that can stop them, and the one thing a small contingent of soldiers knows they must never get.

Join with Sasha, Terrance, Virgil, and the little girl, Max, in an all or nothing gamble as they fight down the road to either salvation or horrible defeat in the thrilling conclusion of this series.

As the day slipped away far off to the west, the darkness of the jungle became a living thing. Knit together by the slow creep of lengthening shadows, it grew by degrees into a massive being, shapeless and black. For nourishment it ate the weak or the unlucky. In return it exhaled moist heat and a cavalcade of sound, the sound of thousands of separate voices, large and small, all coming together to meet the ear in a constant sheet of noise. Those who were responsible for the making of this chaotic ballad were invisible to the naked eye of man. This was so not just because of the darkness, but because most of the performers—the frogs, birds, and insects—were hidden within the surrounding vegetation, frightened of being killed by their neighbors, either eaten, or as was the case with the troop of humans quietly slipping along a trail, flattened under a boot.

His terror of these beasts was not unfounded. Since the first day of the apocalypse when a host of diabolical necromancers eradicated most of the human population on earth and then raised the dead as zombies, the resulting creatures could, with a single bite, turn any living person into one of them. Terrance had seen it done before. It was not pretty. The resilient leather he wore formed a fairly reliable barrier between a bite and death, so day or night, no matter how hot it was, whenever he or anyone else left the barricades surrounding the city of St George’s on a patrol, they wore the protective clothing. The safety it provided far outweighed the bladders of water they needed to carry or the periodic “cool downs” they had to perform while nestled in the boughs of a tree.

Either way, Terrance hated it all.

In fact, he was so busy nursing his various hatreds that he barely noticed when Danger, the woman on point, suddenly raised her fist head-high and froze.

The fire team immediately came to a stop.

Terrance’s finger slipped from outside the trigger guard of his MP5SD sub-machinegun to curl around the curve of the trigger. The contact made him feel safer, more in control.

Around the task force the sound of the jungle withered and slowly died.

The point person opened her fist, laid the flat palm parallel to the ground, and took a knee.

Seeing this, Lieutenant Burgis, the officer in command, looked back and motioned those behind to follow suit.

They crouched and in the dark waited.

There was something out there. 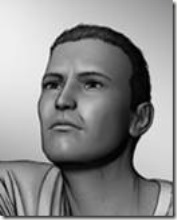 Thank you for taking the time for the interview.

Not a problem. Really. This place is cool. I like the lights.

Yes? Is there anything you need?

Yeah, like a drink or something. You have anything to drink?

I don’t have any beer.

Okay, so if you don’t mind, I’ve got some questions… Are you going to smoke?

Yeah, do you mind?

You just lit it, so I guess not.

So anyway, I’ve got some questions I’d like to ask you.

Sounds good. Fire at will.

All right, so let’s start with your name. Could you tell everyone what your name is?

Very good. So, could you tell us a bit about yourself?

Of course. Sure. This is going to be an awesome interview for you, ya know what I mean? Okay. Let’s see now… I was brought up in Connisburgh, NY. I was the son of a pretty rich real estate magnate. I had everything I wanted growing up, and I still would have if those damn zombie things wouldn’t have gone and wrecked it all. I mean, man, I had an awesome car and an even awesomer boat. We had this great house… what am I saying? We had a couple great houses. And the chicks? Holy sh-t. The chicks. I gotta tell ya, life was pretty phat. Then, yeah, it all went down the crapper. Now the balance book is way off. Now there are way too many sh-ty things I gotta do compared to the awesome perks I’m supposed to get. And I mean way too many. It sucks.

I think that if people could just realize how great I am, there would be no question of my worth. I mean it’s like, the douche-bags who are my “superiors” are always like, “Mama’s Boy”—that’s what they f-king call me, can you believe that?—they’re like, “Mama’s Boy, do this. Mama’s Boy, do that.” What the f-ck is up with that? They have no idea, no idea how they should be treating an idea man like me.

Did you not just listen to what I said? I’m a mover and a shaker! No one takes the time to understand that sh-t.

Hot chicks, good dope, booze… you take it from there.

Available. Are you interested or just asking? ‘Cause I mean…

It’s, like, the end of days, I gotta wear leather or camo crap- none of my cool threads from before. As I said, it sucks.

The pleasures of life! Eating! Drinking! Having the bling! That’s what it’s all about! Sometimes you gotta do sh-ty stuff to get that, but that’s what happiness is, yo!

My current state of mind is pretty f’d up. Things were awesome before and now they suck and I’m just trying to find a way to make things not so sucky. Y’know?

I had this great stash of cigarettes and liquor. Then I traded it all for an easier workload on this aircraft carrier. Now, I don’t know. Now I have a pack of cigarettes. That’s pretty cool.

Stupid bullsh-t work, which is most of the crap these army f-cks want me to do.

I don’t most despise anyone. I really don’t. It’s just that there’s a lot of people that are really serious about saluting and marching around and shi-t like that, and I’m more like, “Hey guys, why you gotta be so f-cking serious? Chill out a bit and get some other poor sap to take out the trash.”

I killed my dad. I loved him. I loved him more than anyone or anything, and then I shot him dead when he turned into a zombie.

I like it if dudes know how to have a good time and not be a harda-s.

That depends. If she’s hot, I’d like her to, ya know… And if she isn’t, well, it depends on how long of a dry spell I’ve had, or if she cooks really well.

Fiction? You mean like a movie? That guy on Die Hard. He was cool. Or, no, no, wait, Conan the Barbarian. He was the sh-t. Imagine that dude chopping up zombies? He’d be unstoppable. And I’d be right behind him.

When I look in the mirror, there’s this handsome devil looking back at me. Him.

If it’s possible, I’d like it so that I wasn’t so cool. That’s not really possible, but there it is.

Eat, drink, and be merry, ‘cause tomorrow you may die.

Once again thank you for the interview.

No problem. Listen, though, I was serious about that earlier. If you aren’t busy later, maybe you and I could, ya know, go out, have some drinks… ya know.

David Monette was born and raised in the cold rural hinterlands of upstate New York. As a typical kid in a typical community, life for him was pretty... typical. He liked to draw creatures and contraptions but as the second born of four sons, such ability was merely a convenient way of standing out from the crowd. As he inexpertly stumbled through high school, his talent for capturing the images in his head onto paper was noticed and encouraged by both teachers and family members.

Without any other idea of what to do with himself after graduation, besides a vague idea of doing something art oriented, he decided to attend Mohawk Valley Community College where he received his associate's degree in Advertising Design and Production. Acting on excellent advice from his teachers at this institution, he went on to Syracuse University where he learned a great deal about art and eventually wound up with a bachelor's degree in Illustration.

With a disturbingly large amount of student debt and a decent portfolio, he learned what it was to be a starving artist. Namely, he found that artists don't starve; they simply pick up an endless series of part time work to pay the rent while continuing to plug away at their true passion. This was essentially what he did until he received his first illustration job and from that point on, he didn't look back. As an illustrator, his highly detailed fantasy and science fiction work has appeared in many books, magazines, board games, and collectible card games for such varied publishers as Dell Publishing, Wizards of the Coast, and Atlas Games. Initially, he had completed these diverse projects utilizing oil and acrylic paints as well as pen and inks.

As digital technology continued to improve, however, he decided it was time to tackle the arduous task of mastering the computer and eventually figured out a way to adapt his style to a digital format. With this knowledge and experience, he went back to school and received his master's degree in Illustration from the University of Hartford. While there, his instructors reviewed his written work and had strongly suggested that he combine his writing ability with his talent as an illustrator to chart his own path.

And hence, an author was born.