Book Blast & Giveaway: Hunted By The Past by @JamiGrayAuthor 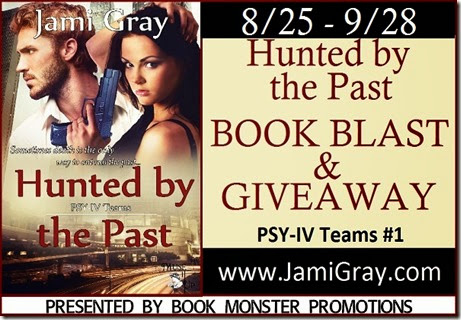 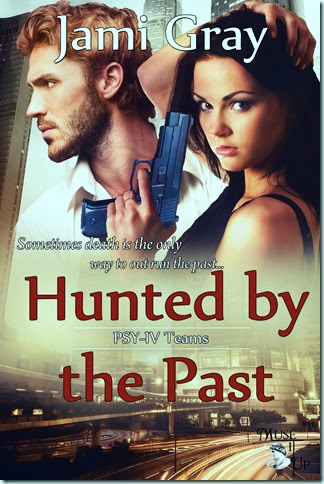 BOOK TITLE: Hunted By The Past: PSY-IV Teams #1

A reluctant psychic who can relive the past, a man well versed in keeping secrets, and a psychopathic killer enter a deadly game where the past determines the future.

Changing the past is an impossibility ex-Marine, Cynthia “Cyn” Arden, understands all too well. Struggling in the aftermath of a botched mission, which cost her two teammates, her military career, and a fledging relationship, she’s brought home by a panicked phone call. The psychic killer behind her nightmares has escaped military custody to hunt down the remaining teammates, one by one. Next on his murderous list--Cyn. Her only chance at survival is to master the psychic ability she’s spent years denying.

The killer’s game brings her face to face with the one person guaranteed to throw her off kilter—the unsettling and distracting man she left behind, Kayden Shaw. Once she believed he’d stand by her side, until he chose his job and his secrets over her. A choice that’s left the scars of the past etched deep on her mind and heart.

To survive this twisted game, Cyn must risk trusting her heart and accepting who and what she is, or lose not only her life, but the man she loves.

Muse It Up Publishing: https://museituppublishing.com/bookstore/index.php/our-authors/57-our-authors/authors-g/445-jami-gray

My spine itched, but no matter how many times I checked my back trail, it stayed empty.

We were only a couple of streets away from The Dragon, but here urban renewal was slow to encroach. Inky eyes of dark storefronts watched my game of cat and mouse, their entryways offered minor concealment. Sprinkled in-between these were the occasional boarded up abandoned shops. Trailing someone on a quiet city street is far from easy. Headlights from passing traffic played havoc on both my eyesight and ability to hide. Watching my steps, I tried not to invade some poor soul’s cardboard home even as bass-pounding, tricked-out cars drew attention at the most inopportune moments.

By the time Ramirez ducked under a flimsy excuse for a fence, sweat coated my spine. Even after nine at night the temperatures were still hovering in the nineties. I picked up my pace and crossed the street as he disappeared into the weed-choked lot. Standing on the cracked sidewalk, I took in the tall, looming shadow hovering in the narrow space between buildings.

Streetlights failed to hold the darkness back, but I could still make out the boards haphazardly covering what had once been windows. Large signs proclaiming the penalty for trespassing ringed the lower half of the two-story structure. Someone even added a few lines of spiked wire and metal rods. As if that would deter anyone from entering. Didn’t prove much of a hindrance to me or to Ramirez, who had disappeared somewhere inside.

My soft curse as one of those barbs scratched along my shoulder had Kayden coming across the line. “Where are you?”

“Between First and Central on Monroe. Ramirez just disappeared inside an abandoned building.” I worked my way around the side accompanied by the clicks and hums of an overly loud chorus of insects.

“Hobbes just paid his check, I’ll meet up with you.”

“No,” I said, spotting a gaping hole in the far back corner. “Delacourt’s orders were to stay on him, so stay. I’m fine.”

“And if that changes?”

“Fine,” Kayden growled. “Cyn, you keep your ass in one piece until I get there.”

“Don’t forget my camera,” I reminded him. His grumbled curse made me grin. Standing outside the ragged opening, I wished for a flashlight. Instead I pulled my Sig free and with a sigh, warned the team, “Going quiet.”

It took some serious contortions to make it around the rough edges of the opening. Once inside, the heat was stifling and sweat popped out on my forehead. With both hands on the Sig, I used my shoulder to wipe it away before it stung my eyes. I held still, waiting for my vision to adjust to the shrouded interior.

I’d come in from the back of the building. Some diffused light made it in-between the gaps of boards and a series of holes peppering the back wall. Unidentifiable piles were scattered across the floor. Walls divided the space into a maze where anything or anyone could hide. Underfoot, a thin layer of grit layered the concrete floors, making it hard to keep my steps silent. From the ceiling, large panels hung like drunken Legos just waiting to fall on the unwary.

Sound reached my ears. I held my breath, straining to listen. The indistinct murmur resolved into voices. Did Ramirez have company or was he talking to someone on the phone? Dust trickled from the ceiling as someone walked across the second story floor. Stairs, somewhere there had to be stairs. Doing a slow scan of my surroundings, I found them crouched in the far corner.

Keeping my back to the wall, I drifted forward. Shifting shadows added a creepy vibe to the gaping doorways and piles dotting the open floor. The tang of smoke found its way up my nose. Using an outstretched hand, I brushed my fingers along the rough surface of the wall. Bringing it back, I could make out the smudge of black now staining my fingers. Great. I got to creep around in burned-out building.

Staying close to the wall, I lowered my gun and kept my finger on the side of the trigger. Trying to hold my gun upright for too long would result in muscle fatigue. More dust rained down as whoever was upstairs walked across the floor. Maybe Ramirez was pacing? Or were there two people up there?

Time to brave the unknown. Was there any other way to the second floor? One that wouldn’t dump me in front of Ramirez and his possible company? It took time and a nerve-wracking patience to work my way through the lower level, but it paid off in a small second, narrow flight of stairs near the front of the building.

Sending a quick prayer that they would hold my weight, I began to creep upward. A handful of steps from the top, a board underfoot gave a loud protest. Dropping into a crouch, I kept my gun aimed at the dark opening and tried to calm my pulse. The murmur of voices stopped. A tense, waiting quiet crept in. 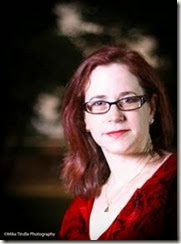 Jami Gray is the award winning, multi-published author of the Urban Fantasy series, The Kyn Kronicles, and the Paranormal Romantic Suspense series, PSY-IV Teams. Her latest release, SHADOW’S MOON (5/14) was a Golden Claddaugh Finalist, and the first in her newest series, HUNTED BY THE PAST, hits shelves in July 2014. She is surrounded by Star Wars obsessed males and a male lab, who masquerades as a floor rug as she plays with the voices in her head.