Book Blast, Giveaway & Interview: The Fraternity of the Soul Eater by @scottlernerauth 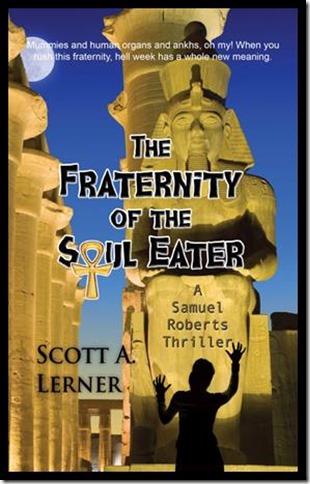 The Fraternity of the Soul Eater

ASIN: Not yet available

It’s been a while since Samuel Roberts was called upon to save mankind, and he’s getting restless. His girlfriend Susan thinks he’s a danger junkie, and he’s worried he has a hero complex. He’s back to his usual small-town lawyerly duties in Champaign-Urbana, handling divorces and helping people beat DUI raps. But then a young fraternity pledge calls. During an initiation ceremony he witnessed the live sacrifice of a young woman, but he had so much alcohol in his system that no one believes him. Except Sam. Lately Egyptian lore has been creeping into his life, his dreams, and his movie preferences, and he’s pretty sure he knows why. Evil is knocking on his door again.

Is the call welcome? Why can’t Sam be satisfied with his comfortable legal practice and gorgeous redheaded girlfriend? Maybe it’s because he knows that, as inadequate as he may feel to the task, he and his friend Bob may be humanity’s only hope against ancient supernatural forces combined with modern genetic engineering. Come hell or high water. Or in this case, the underworld or subterranean pyramids.

The Fraternity of the Soul Eater is the third book in the Samuel Roberts Thriller series, which began with Cocaine Zombies and continued with Ruler of Demons.

She was wearing tight black jeans and a low-cut cropped T-shirt that exposed ample cleavage. A golden ankh dangled between her breasts. On one forearm was a tattoo of a bird I assumed to be a lark, and on the other, a tattoo of a hawk. Her bright blue eyes matched her hair. She was striking looking but by no means beautiful. A slight muffin top was made more visible by her short shirt, and she had apparently broken her nose at least once in her life. She smelled like sandalwood and cinnamon.

I would never cheat on Susan, but I had to admit there was something sexy about Lark. I tried to put my prurient thoughts away and deal with the issue at hand. Also, the ankh made me wonder if she was playing for the other side. I was not a big fan of birds, which for me had always been a harbinger of bad luck.

“So what is it that you couldn’t tell me at the courthouse?”

“I’m a graduate student at the University of Illinois and heard from a friend about Chris’s case. I went to the preliminary hearing to get more information.”

“That’s fine—it’s an open courtroom—but I can’t tell you the specifics of his case.”

“I am here to help you, not the other way around.”

“Cool!” I leaned back in my chair, trying to look casual. “Tell me what you know.”

“My sister was at a party at that fraternity three years ago. She has not been seen since. I believe she was killed there. I can’t prove it, but I have been trying to ever since.”

“Did you call the police?”

“No, I called Pizza Hut.” She sighed. “I’m … sorry. This whole thing …. it’s hard to talk about. Yes, I called the police and the FBI. I even hired a private investigator.”

“You take it right. I was attending the University of Iowa. I was close to getting an MFA in fine arts but I transferred to the University of Illinois a year and a half ago. I’ve been investigating the fraternity ever since.” As she spoke Lark moved her arms about in quick gestures, reminding me of the bird she was named for.

“What have you learned?”

“For starters, I believe your client.”

She hesitated, as if pained by what she was going to relate. “Last year I dated a guy named George Hammond. He was a rich kid, kind of a geek, but he was okay. I essentially stalked him until he agreed to go out with me. At first I was only interested because he was pledging the fraternity. I know I was using him, but he was using me too. When he got accepted into the fraternity he told me a few of their secrets.”

“Any chance I could chat with George directly?”

She shook her head, a little violently. “Not unless we hold a séance. I’m sorry. I appreciate you speaking with me, and I don’t mean to be sarcastic. George died in a car accident. Actually, he was murdered, but I can’t prove it.”

“Every fall the fraternity sacrifices a girl. Their choice is based on her not having much in the way of family or money. They want someone who won’t be missed. The organs are removed as though she is to be mummified. Since there’s no pyramid to bury them in, the bodies are not wrapped or mummified or even kept.”

It was difficult to absorb what she was telling me. “That is nightmarish. What the hell do they do with the bodies?”

She jerked her shoulders up and down in a shaky shrug. “Who knows?”

“Why would they do such a thing?”

She looked mournful now. “George didn’t know. It may have been to test the pledges’ loyalty to the fraternity. He said they would commit the murder at a hidden temple and that the members would have to chant ancient prayers as part of some strange ritual. The leaders of the fraternity told him that the girls’ souls were being fed to the ‘Soul Eater,’ but George didn’t think they were serious.”

“Do you believe what George told you?”

She looked me hard in the eye. “My sister is missing.

No, I thought it would be cool to work at a zoo. Yet, to get an advanced degree in zoology required a lot of math and science.

When Cocaine Zombies was published.

Like the main character in my book, I am a lawyer. If you and your two million closest friends buy The Fraternity of the Soul Eater, I can quit that pesky lawyering.

The latest is The Fraternity of the Soul Eater. Image that a fraternity at a major Midwestern University is sacrificing co-eds to an Ancient Egyptian deity. Why would they do something so evil? They are trying to create a new Egyptian dynasty. They want to take over the world.

The writing does not take that long. I tend to go back and redo things a number of times. It would be hard to give an exact period of time.

Next up is the Wicca Witch of the Midwest. It is part of the same series and should come out around Halloween. Expect good scary fun.

The publisher lists them as Urban Fantasy. Personally I don’t know how to characterize them. They have some humor in them as well as horror and mystery. I would leave it to the reader to decide.

I have an idea for the book prior to creating the title. But I do create the title before starting to write the book.

No, most of the messages in my books are straightforward. I leave it to the reader to determine if the messages matter. The Fraternity of the Soul Eater is full of questions if not answers about our society. Is genetic engineering safe? As a nation are we over-medicated for depression and other ailments? Is it wrong to sacrifice and dismember others?

Like everything else, yes, if done right. The movie The Shining is better than the original book. The Harry Potter movies were great. That said, most movie adaptations fall short. The Hobbit was a great book but the movie made little sense. At least to me. Apparently it made a lot of money.

Author and attorney Scott A. Lerner resides in Champaign, Illinois. He obtained his undergraduate degree in psychology from the University of Wisconsin in Madison and went on to obtain his Juris Doctor degree from the University of Illinois in Urbana Champaign. He is currently a sole practitioner in Champaign, Illinois. The majority of his law practice focuses on the fields of criminal law and family law. Lerner’s first novel and the first Samuel Roberts Thriller, Cocaine Zombies, won a bronze medal in the mystery/cozy/noir category of the 2013 Independent Publisher (IPPY) Awards. The second book in the series is Ruler of Demons. The Fraternity of the Soul Eater is book 3. Book 4, The Wiccan Witch of the Midwest, will be released on Halloween, 2015.

You can find Scott online at: www.scottlerner.camelpress.com