Review: More Than Magic – Semester Aboard By Elizabeth Kirke 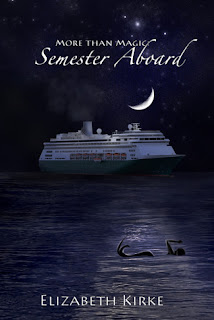 Jen have decided to study aboard, and it gets even better this college is on a ship. She meets a boy called Dani and is soon meeting some of his other friends. When she wakes up one night and decided to go and get some fresh air, what she found was devastating. She witness Dani being shoved overboard by his wife and nobody around acted to save him. While hammering on the bystanders for just standing by and not doing anything Dani jumps back on the ship unharmed.

Jen finds out that there is a world with magical beings and to her surprise she is one of them. Now stuck on a ship with a gang of magic’s she embarks on a journey to learn how to be a witch. What she didn’t bargain for was to find vampires hunting them and endangering everyone aboard. Her new world is filled with magic but with it comes the dangers of it.

Jen character is thrown into a magical world and she at first finds it utterly amazing. But with the dangerous around the magic world she is overwhelmed and afraid. Very observant she also catches secrets kept from her and exposes them quickly. She goes from scared to amazed to right out brave and loyal. Other additions like Dani and TS was just as impressive. Dani is quirky and fun, but when needs very dangerous. Thomas character was the one filled with strange secrets.

I absolutely loved this book. It was filled with all the right elements to keep you glued to the pages. Jen is quite the witch. Very observant nothing escapes her eyes, and when she starts putting things together the others are left stunned. The magical elements in the book are also impressive. You get to see another side to favorite beings like vampires and werewolf’s. But also new beings are revealed and with them also stunning new elements. Elizabeth’s writing style was easy going and well written. The humor in the book also had me smiling most of the time. Fantastic adventure with a fantastic cast of characters.

Quote from the book: "Hello? Hi, Thomas." My jaw nearly dropped; he had answered in a flawless impersonation of Mariana. "Everything's fine. Mm hmm...we will...oh, hey, have I ever told you I think you're handsome?" I could hear Thomas yelling on the other end. Dani switched back to his normal voice without any visible effort.

Blurb -
College student Jen Maddox is a few days into her summer study abroad program and has loved every moment. She just left Mexico and is back on her cruise ship campus, ready to sail to Panama. Everyone tells her that the experience will change her life, but none of them realize just how right they really are.
One night Jen goes out on deck and encounters five other students. She knows Charlie from one of her classes and he's a funny, friendly, regular guy. Picture-perfect Dani and his gorgeous wife Mariana live right down the hall from Jen. And she has seen TS, who's built like a truck, around the ship and recognizes the cute, but quiet Thomas as well.
Then Jen sees something that isn't humanly possible. Jen would have thought that it was all a dream, if not for the fact that Charlie, Dani, Mariana, TS, and Thomas are making every effort to cover it up. Suddenly, the five of them are everything but normal and Jen is determined to figure out what they're hiding.
When she does, her life really does change. Jen expected to spend her summer studying the cultures of Latin America, she never dreamed she'd learn about a magical culture instead.
But Jen's childhood fantasy come true is about to turn into a nightmare; there's something on the ship. Something dangerous. Suddenly, everyone on board is threatened by a creature that Jen never even believed existed. Jen and her new friends might be the only people who can stop it!
Now Jen has to learn everything she can about her new world before it kills her. And her friends. And maybe everyone on the entire ship. 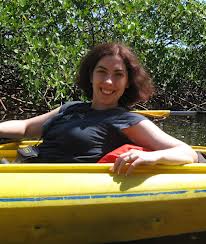 The More than Magic series is written by Elizabeth Kirke. She wanted to be an author before she even knew what an author was. She used to say that she wanted to be an artist, but that was only because she was too young to write and had to tell stories with pictures instead. She hasn't stopped writing since she learned how. It wasn't long before she dreamed of becoming an author and couldn't be happier now that that dream is a reality.
If she isn't writing...well, let's be honest; if she isn't writing she's probably on Facebook thinking that she should start writing. But, if she isn't writing or on Facebook, she's probably doing something involving books, baking, gardening, or yarn. In an ideal world, she'd be reading and knitting while something from the garden is in the oven. Then again, in an ideal world, she'd have a flock of ducks and a couple of goats.
Visit the author at:
Blog: http://elizabeth-kirke.blogspot.com
Facebook: http://www.facebook.com/morethanmagicseries
Twitter: @more_than_magic
Email: morethanmagicseries@gmail.com