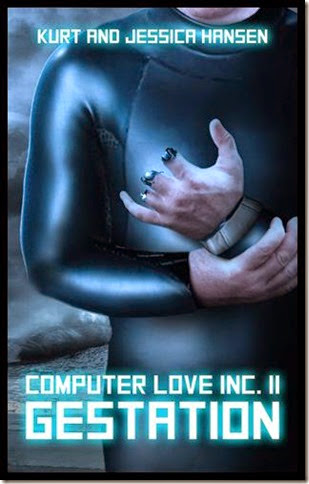 After the sudden deaths of two previous Computer Love Inc. CEOs, Marius takes control of the company. Embracing the talents of his godson, John, and his best friend, Zak, he hires the boys to oversee the Companion Services Division.

Marius refines his breakthrough technology, the Brain Machine Download, and as a result, creates his double, M2, as the prototype. Together, they ignite the future of

Computer Love Inc. by acquiring an elite team of scientists to expand the company’s technological boundaries. Meanwhile, Marius struggles with the government’s demands for a clandestine initiative - the Secret Service Companion.

Between the looming government presence and the overwhelming force behind his new team of inventors, can Marius survive the outcome of his own creations?

“So, Marius, I’m pleased, as I’m sure you must be, that the download between you and I went so well.”

The remark was sudden and bewildering.

“Yes, I am also pleased…” Marius paused. “What brings that up, M2? Is there something you feel we need to improve upon?”

“No, actually, I don’t think that at all. In fact, I think the process and aftermath have proven to be extremely fruitful, don’t you?”

“Well, as you know, to say that we think alike would be an understatement.” M2 paused and allowed Marius to have a laugh. “So obviously your knowledge of robotics resides not only within you, but within me as well. I know you’ve thought about it, the possibility to help the company pounce into the next generation. What if, say, we were to make a team of Companions, not unlike myself, created from experts in different fields? For example… We could use that famous technology instructor, the woman from Advance Propulsion Labs who’s won awards for all of those groundbreaking projects they’ve done recently, or even that metal-loving genius who combines materials recovered from asteroids with titanium and such. It would be a team of biorobotic and propulsion brilliance with unlimited potential!”

Character Bio: Marius is the protagonist in the Computer Love Inc. series. He is the head of the Computer Love Inc. company, and is a major creator of the Companion, a biorobotic mate that becomes wildly popular. Marius has dark hair, is in his late forties, and has a very kind, warm personality. He is very caring and endearing, but tends to be an introvert and is often reserved. He is brilliant; in fact, he’s often too smart for his own good and sometimes even tends to overcomplicate certain situations. He has never been married and is frankly unsure about what to do when it comes to women, but he treats all of his employees, friends, and everyone he encounters with respect and compassion. This is especially true when it comes to his godson, John, and John’s best friend, Zak, who are also main characters of the story.

While Marius often comes off as being meek, he is fully aware of his intelligence and accomplishments. He is good at what he does, and he knows it. In fact, he regards himself to be so important to society (which, in truth, he is) that he constructs a double, aptly named M2. Even though he’s reserved with others, those who know him well enough get the chance to see Marius’s fun side. He loves going back and forth with his closest friends, and can receive a jibe as well as he can dish one out.

Despite being extremely tech-savvy (he is, after all, a creator of the best-selling technological product on the market), Marius is also ultra-traditional. He has an heirloom wristwatch, which, at the point in the future in which the series takes place, is almost unheard of. He also loves nature, though his responsibilities leave him little time to enjoy it. Marius, John, and Zak are all beer connoisseurs, though Marius tends to hold his alcohol very well (with the exception of one incident that takes place in Gestation). While Marius is, at his core, a respectable person who cares deeply about others, he often finds himself struggling with the moral dilemmas that his line of work presents him with. Like anyone else, Marius is neither a saint nor evil - but in the end, we are left to wonder which force will have a greater pull on him.

I’m being completely honest here when I say that I truly don’t believe I have any negative qualities - to be multifaceted, with some qualities which are better than others, is to be human. That being said, I’m sure my godson and his friend would tell you that I have an obsession with personal security, which I suppose could be seen as an unfavorable characteristic. To enter my home, one would need access to a complex series of passcodes. I’ve been told that this presents certain difficulties for visitors, but I see no fault in regarding personal privacy and security as being of monumental importance.

As for my best quality… How could I pick just one? I have achieved legitimate genius status, am incredibly technologically inclined and fun to be around, and I contributed greatly to the creation of the Computer Love Inc. Companion. I could go on, but for the sake of time, I’ll stop here.

I wish other people knew that I value traditions, history, and the past just as much as I appreciate new technology and innovations.

I have seen parts of the world that few other people have ever had access to. That is all I shall say about that matter.

The balance between humanity and technology concerns me. This notion often occupies my thoughts throughout the day. That being said, I do know that Computer Love Inc.’s end goal is an admirable one, and that my contributions to society have already been extremely beneficial.

More than anything, I’d like to guarantee comfort and stability for future generations.

I guess one might say that I have a bit of a rebellious side; though I do try to assess the pros and cons of each of my actions.

My greatest achievement was undoubtedly aiding in the creation of the Computer Love Companion.

Happiness is a cold beer, staring off my back deck into the forest as the sun sets.

A bit frazzled… I tend to grow concerned that things may be getting out of control. But such is life, I suppose.

My wristwatch, which has been passed down through the generations of men in my family.

I’m not sure if this qualifies as a “characteristic,” but I have a tendency to misspeak when it comes to reciting common clichés. I am teased by my godson and his friend relentlessly about this.

I dislike the radicals who are trying to accuse me and my company of having no regard for the rights of Companions. I am one of the creators of the Companions, so to suggest that this company isn’t supportive of their rights is ludicrous.

I won’t disclose that here, but I’m fairly certain that they know who they are.

My greatest regret has very much to do with a tiny microchip. I originally thought that the development of this object would prove to be relatively inconsequential, but I was wrong.

Loyalty, above all else. It has become increasingly difficult to find.

While I consider loyalty to be the chief quality in both sexes, I think that a woman who is passionate about her goals to the point of near insanity is incredibly admirable. I would say that Shonda and Anna, both of whom are members on my Team of Elite, exhibit these qualities.

I’m not sure that he can be considered a “hero,” but C-3PO is one of my favorite fictional characters. He was really ahead of his time.

Although he is younger than me, and I’m using the term “living” loosely here, my godson, John, is admirable to me. He’s overcome some incredible feats, and continues to amaze and surprise me all the time.

Although I don’t think I require any changing at all, I guess I could use some pointers when it comes to courting a lady friend. 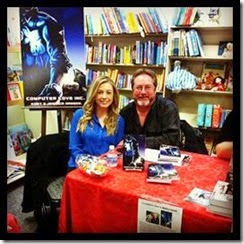 Kurt and Jessica Hansen reside in northern New Jersey . Kurt has worked in the aerospace electronics industry for over three decades and enjoys the outdoors, writing, and composing music. Kurt is easily recognized with a guitar in his lap, a pencil in his mouth, and a piece of paper in front of him.