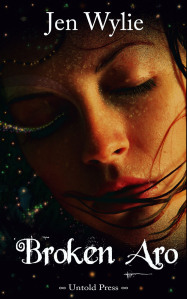 Fifteen year old Arowyn Mason, Aro, life is changed forever when her city is attacked by slave traders. In an attempt to save Aro from the attack, her seven soldier brothers deschise her as a boy, and tries to flee the city. But the escape didn’t go as planned and Aro wakes up in a slave boat on her way to the slave Capital.

On the boat she finds only one familiar face among the other prisoners, and learns that her brothers didn’t survive the attack. Alone and scared she has no choice but to continue the role of a boy and make new allies to escape her doom that was fast approaching. She meets Kendric, The Prince, Bo, Cain, Avery and Kei. These would be the men that not only become her saviors, but her family.

When the ship hits something all but Kendric survives and wash up on a beach, a new survival plan needs to be followed. Her true genre is soon discovered, and the men band together to protect her. She forms a firm bond with two, the mysterious prince and Kei the fey and with them she finds strange worlds and prophecies that included her.

Her journey to freedom is hard and long. And the toll of losing love ones have started to take its toll on her. Never the less, Aro stays strong and ensure that her new family stays strong with her.

What an amazing cast Jen created in this novel. As a young child Aro is scared most of the time but tries her best to find courage. And to loose so many love ones her emotions is not as strong as she wish to be. The mysterious prince was my favorite character, he became her instant protector and as the time past and she starts to grow it is clear that he sees more than just a young girl. Kei was just as interesting; his character loss control and goes all ballistic creating a vicious creature that kills nonstop. But when he is not in beast mode he was charming and caring. All these men had a very protective nature.

This was such a fabulous read. In the old world, Jen created a nerve racking adventure and added in some fantastic creatures to spice it up. You have fey, elves, weres and dragons all finding a way into Aro’s life. I really enjoyed the men in this novel. They were protective, caring and understanding. The perfect ingredients to a gentlemen, yet they all fought just as well. At some times I was wishing Aro all grown up; just to see what reaction these men would have. And as the story progressed wasn’t disappointed. I will admit that I am definitively team prince here. If you are looking for a fresh read without the usual paranormal setup this is it. A well-deserved five stars and I can’t wait to get my hands on book two.

Quote from the book: “He promised he’d never leave me. That we’d be friends forever.” “He was foolish to promise such things,"

Open your eyes to darkness. What do you see? Does the darkness frighten you? Now imagine the darkness being the cargo hold of a slave ship. Your city has fallen. Your family is most likely dead. You don’t know anyone around you, and some of them aren’t even human. Giving up would be so easy to do, but not for Arowyn Mason. Not after being raised in a military family with seven brothers. Every great story should begin with a plan. Aro’s was to escape and to survive.
Escape comes, but at a price. As they reach the shore, Aro and the other survivors learn that freedom doesn’t mean safety. The slavers want their property back and will do anything to get it. The party uses every ounce of their brute strength, a hearty helping of cunning, and even ancient magics to keep themselves alive. Sickness, danger, and even love surprise them at every turn. Dealing with danger becomes their way of life, but none of them ever considered that nothing can be quite as dangerous as a prophecy. Running turns into another race altogether as her world falls to pieces again and again.
Novel length over 70k words.

Book two,Broken Prince, will be out June 1st!

Jennifer Wylie resides in rural Ontario, Canada with her  two boys, Australian shepherd a flock of birds and a disagreeable amount of wildlife.. In a cosmic twist of fate she dislikes the snow and cold.
Before settling down to raise a family, she attained a BA from Queens University and worked in retail and sales.
Thanks to her mother she acquired a love of books at an early age and began writing in public school. She constantly has stories floating around in her head, and finds it amazing most people don’t. Jennifer writes various forms of fantasy, both novels and short stories. Sweet light is her debut novel.
Author Links:
Website
Goodreads
Twitter
Facebook