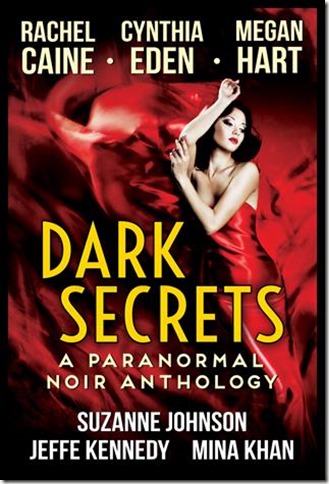 Six award-winning authors bring you this spellbinding collection of stories about dark desires, mysterious worlds, and danger that lurks in the shadows of the night. Where nothing is black and white; where things might not be as they seem; where magic and mayhem rule.

Valentine is a detective with two major problems: he's been offered a kidnapping case that will probably get him killed, and his partner won't let him turn it down. He owes her that much … since his partner's a ghost, and he's the one who killed her. A dark, haunting noir mystery of love, hate and loss.

PI Mick Swayne has seen it all—his clients have included liars, thieves, and even killers. He thinks he can handle anything and anyone. Then she walks into his office. Savannah Moreau is beautiful, seductive, and…a vampire? The gorgeous vamp hires Mick to help her track down a killer who is hunting in Chicago, but as Mick slips deeper into Savannah’s paranormal world, he wonders if he can really trust his new client…

DANCE WITH THE DEVIL by Megan Hart

When the devil starts the music, you'd better get ready to dance.

Kathleen Murphy has sold her soul to the devil. Fame, fortune, success...everything she's ever dreamed of is hers, and all she has to do is the devil's bidding. When love comes knocking, the last thing in the world she wants to do is involve Jake in her twisted world, but the devil's started up the jukebox and Kathleen has no choice but to learn the steps.

THE CONSORT by Suzanne Johnson

Faulkner Hearne, the captain of the ruthless Fae Hunters, finds his duty at odds with his heart when he’s ordered to capture the consort of Faerie’s cruel Prince of Summer when she flees across the veil into modern New Orleans. Can Faulk turn Liandra over to a certain death at the hands of the prince, or will he risk a war with Faerie in order to save her? An all-new novella set in the Sentinels of New Orleans multiverse.

A dark fairytale retelling of a princess robbed of rank, husband and even her name.

Nix is nothing. The Princess Natilde—her former waiting woman—attacked her on the journey to wed Prince Cavan, stripping her of everything and taking her place. With no serving skills, Nix becomes a goose girl. Perhaps if Nix keeps her promise never to reveal who she really is, Natilde won’t carry out her vile threats. Prince Cavan entered his arranged marriage determined to have a congenial, if not loving relationship with his future queen—for the sake of both their kingdoms. But, his wife repels him more each day and he finds himself absurdly drawn to the lovely Nix....With broken vows, anguish and dark secrets between them, Cavan and Nix struggle to find the magic to restore what’s gone terribly wrong... if it ever can be.

THE DJINN IN THE MIRROR by Mina Khan, a Djinn World novella

A paranormal Cinderella story with a young witch as the heroine and a wicked, sexy djinn instead of a fairy godmother....Dahlia, the step-daughter of a power hungry wizard, promises to free a djinn trapped in a mirror if he rescues her from impending death. But Ashmael the djinn has his own agenda: to trick & seduce his way to freedom. The only problem is he ends up falling for Dahlia. Can he win his freedom and save the girl?

Character Bio: Faulkner Hearne is the Captain of the feared Fae Hunters, the elite team of Hunters who live in the human world, tracking down members of Faerie who’ve illegally crossed the veil. He lives in New Orleans, where he runs The Hunt Club, an off-the-grid nightclub where off-duty Hunters can engage in simulated Wild Hunts or other play with willing humans. Faulk’s Fae name is Falconer, and he’s the eldest son of the Autumn Prince. He’s about 6-2, with shoulder-length dark hair and amber-colored eyes. Like other Faerie nobility, he has high cheekbones and slightly uptilted eyes.

Aw hell, I don’t know. I guess my worst quality is my impatience with Faerie politics. Sometimes I hate the fae. No, I think that’s my best quality.

That I really don’t have any interest in what’s going on back in Faerie, unless it involves my younger brother. I take my assignments, I catch whatever fool faery has crossed the veil into the human world, and I take ‘em back or kill them—whichever the situation calls for.

I might have more magic than I’ve let anybody know about.

Getting dragged into a civil war in Faerie. Which is looking more and more likely.

To be left alone to do my job. To find a human woman as my mate; the women of Faerie are way too vain and calculating.

Happily single. I just got a new assignment—a woman I’ve been ordered to find—that’s kind of getting under my skin. Which means she needs to go.

Oh, honey, you have no idea. But I could show you.

Getting out of Faerie without having to take the Autumn Throne. My younger brother Yuri is much better suited to that life.

I don’t know. I’m kind of a restless spirit. It’s the reason I like living among humans; they’re unpredictable and keep me from getting bored.

A pair of heavy leather gloves that belonged to my ancestor, the original Hearne the Hunter. The fae cannot touch metal with bare skin, so they are never far from me.

The Hunters have a reputation—earned, unfortunately—of being ruthless with our quarry, male and female alike. Since becoming Captain of the Hunt in the human world, I’ve insisted on treating our prey with dignity and fairness. Unless they give us trouble, and then all bets are off.

Florian, the Faerie Prince of Summer. He’s a sadistic asshat. Not to mention crazy. Of course, most faeries are crazy, now that I think about it.

Brains. I want a woman who’s smart and can think for herself. I don’t want to be anybody’s hero.

My best friend and chief lieutenant, Romany. Romy is loyal and passionate but knows how to have fun. I haven’t quite gotten the fun thing down. Hm. Think you could help with that?

Award-winning author Cynthia Eden writes dark tales of paranormal romance and romantic suspense. She is a New York Times, USA Today, Digital Book World, and IndieReader best-seller. Cynthia is also a three-time finalist for the prestigious RITA® award. Since she began writing full-time in 2005, Cynthia has written over fifty novels and novellas.

Award-winning author Mina Khan grew up in Bangladesh on stories of djinns, ghosts and monsters. These childhood fancies now color her fiction. She daydreams of hunky paranormal heroes, magic, mayhem and mischief and writes them down as stories. She is the author of the Djinn World Chronicles, including The Djinn’s Dilemma and A Tale of Two Djinns, as well as Wildfire, a paranormal mystery with cowboys and dragons.