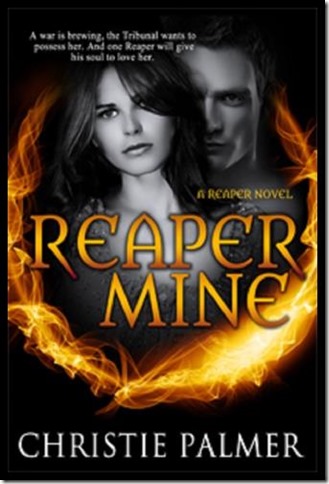 A war is brewing; the Tribunal wants to possess her. And one Reaper will give his soul to love her.

Now he only needs to can keep her alive long enough to find out who wants to kill her? And why the hell did the Tribunal want her so badly?

She was a demi-goddess. A cursed demi-goddess, who had accidently bound her soul to the Reaper over Violence in order to save her butt from a Freak trying to kill her in a graveyard.

Elle was having a really bad day.

He had almost lost her today and something deep in his chest had broken lose at the thought of losing her, and he just needed to feel her close to him. He would be damned straight to hell itself before he walked away from her right now.

So he kissed her, he wrapped his arms around her slippery body molding her against him under the pounding hot spray of water. Slanting her full lips over his, pressing them open he sank his tongue into her mouth to tangle with hers. She moaned into his mouth and wrapped her arms around his neck, making it easier to sink further into the kiss.

Victor lost himself in the kiss. The feel of the woman in her arms, full breasts pressed against him. And he grew light headed with desire; he broke the kiss to drag air into his starved lungs.

She tasted like warm sunshine, and the second he could breathe, he dipped his lips back to hers. Elle moaned into his mouth and Victor was lost, he thrust his tongue deep into her mouth, rubbing against her and drawing her tongue into his mouth he sucked on it. Drawing her unique taste and flavor into his mouth. Memorizing her, gods he couldn’t get her taste deep enough into him. She made the most amazing sounds as he drifted from her mouth to the side of her neck. Elle burrowed into him resting her head against his chest, he thanked the gods he had left his boxer briefs on. As he tried to control the urge to press her against the shower wall and take her.

“Elle.” Her name came out more as a moan.

I have wanted to be a writer since I was young. I can’t remember ever wanting to be anything else. The drive and need to write has followed me throughout my life.

I didn’t really consider myself a writer until I finished my first book.

I’ve been writing since I was a young teenager and I’m in my 40s now. I didn’t start trying to get published until 2010, and after many rejections from traditional publishers I finally decided to go Indie and self-publish in 2012. So more years then I really want to count, but they were years that I learned what I wanted to write, and who I was as a writer.

By day I am an IT Account Manager/Technical Analyst basically I implement customer accounting software for self-storage companies. Sounds so exciting I know!!!

Reaper Mine: Love story between a Reaper and a cursed demi-god, toss in a couple of freaks, toss in a mad scientist.

I am proud to be self-published.

Really depends on the book. But if I have a well fleshed out idea I try to finish a book in 90 days.

I am just finishing up my 4th book, and have already started on book 5. Booth of which will be published next year.

I had a reading disability when I was younger and my mother kept forcing reading on me. With the hope that if I found something I enjoyed reading I would read through my disability. And believe it or not it worked, I fell in love with reading Sci-fi Fantasy in my teenage years. My second love was Romance novels. The very first story I ever wrote was from a book I didn’t like the ending, it was a Fantasy that didn’t have a happy ever after, and gosh dammit everybody deserves a happy every after. So I wrote a happy ever after and I’ve been writing ever sense. That’s where my need to write paranormal/fantasy romance comes from.

I write about Trackers who are natural born hunters. I just love them because they are just hard core. Nothing seems to shake them and they always get what they want. One particular Tracker named Skylar is just a snarky guy and whenever I write about him he makes me smile. I seriously cannot wait to write his story it is going to be so much fun.

So as I mentioned I have been writing since I was a teenager and I read a book with an ending that utterly devastated me. I thing when I read it I through the book across the room. I might have shed some tears. But once the dust settled I was so upset it drove me to pick up a pencil and paper and write a happy ever after for the hero and heroine. I just couldn’t live with the ending the author had given the characters. I still have the story I wrote in a trunk in my closet.

The only thing I do for my writing is I have to be listening to music. I do have playlists for my books and I’ll put them on to get me in the mood. But really I can be anywhere to write.

I always tell myself I’m not going to read my reviews but I do. I shouldn’t because when I get a bad review it totally affects me.

It is soooo hard for me to pick a title. I suck at it, I have to ask my husband, my kids, my friend, the lady at the grocery store. Just about everyone I know for ideas. I suck at picking titles. So I definitely wait until the book is finished before I pick out he title hoping for some type of divine intervention.

For character names I usually google baby names, I really Celtic names and meanings have to have something to do with the book. For places and locations? I research locations and look at pictures to make sure they are what I am looking for as places my characters would fit in.

I little of both, depending on the storyline, and the action taking place. I need to know what is going on in the story and why what the character is going.

I am a seat of the pants type of writer. I let the character develop as I write, they are going to be who they are.

My all time favorite book is called The Blue Sword by Robin McKinley and honestly I have read it so many times I couldn’t begin to tell you how many times I’ve read it. Just thinking about it makes me want to go home and read it. I should probable get it on my tablet.

Hmm good question. I think that if you don’t go in with high hopes you won’t be disappointed. That might sound like a horrible answer but it’s what I always think when I’ve read a book and then go see the movie adaptation.

Here is the problem, a movie can never, ever contain all the detail that a book has. Therefor a movie is never going to be what a book is. So I always go into a movie from a book to be entertained but not for it to be exactly what the book was, because that is impossible.

The best adaptation: The Lord of the Rings Trilogy

I honestly don’t have a favorite author, I read so much its about who I’m reading who I love now.

Christie was born and raised in a suburb of Salt Lake City, Ut. She lives less than a mile from

the home she grew up in. World traveler she is not. But what she lacked in travel she more than made up for in her imagination. Within her vivid imagination she has traveled the world over as well as different worlds and different times.

She works a full time day job to pay the bills but looses herself in books and her writing whenever possible.

She is a loving mother of two wonderful children that she admits she is obsessed with. She has been married for 18 years to a very tolerant man that is grounded in reality in order for her to fly to the heights of her own imagination.

She started writing when she was a teenager after reading a book that she didn't like the ending too. Took a hiatus to raise her wonderful children but has dedicated herself to becoming a published writer for the last several years