Book Blitz: The Scent Of Power by Eri Nelson 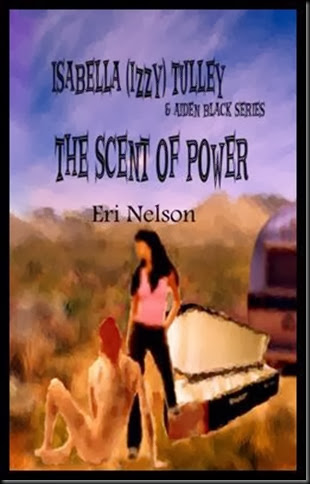 The Scent Of Power

Isabella (Izzy) Tulley and Aiden Black Series are a collection of adult books that take dark desires on a modern day mythology ride.

Eri Nelson once again shows that Izzy is pulled between the mortal world she knows and the Realm Of The Gods which represent the secrets as well as lies of those who dare to be her own blood. Amid guilty pleasures, looming powers, deceitful tales, walking dead attacks, along with the occasional bite to the neck Izzy manages to run and fight for her life in the only way she is learning how…one step away from insanity.

The author shows that she truly enjoys the shadowy sides of writing in this Isabella (Izzy) Tulley & Aiden Black Sequel. Taking readers faster and farther into hidden realms. Where life and death pursuits push heated lust to all new heights.

As an author, Eri Nelson enjoys rapid action driven hastily along in a quest for fantasy gone awry. With each new look into this series it is our author’s hope to take readers by surprise and leave them wanting for more.

With the Grimoire in hand Izzy stated as if talking to the book as if she would any other, “It’s not safe for you.” In response, the book glowed and vanished from her grasp.

The odor was far more potent than her first stumble upon their type. At this point, she was sure that this would be her second run in with this kind. Since she had not encountered it while searching for their The Cursed visitor, Tempest, she was confident these were a different kind of being. More importantly, she was positive that Arnost as well as her sister were keeping yet another secret from her. If she were able to get through this she would be certain to ask this time what were the ones known as blood mad?

Instead of a shaded moon to guide her way, Izzy had the evening sun setting to light up the horizon. It would be a lighted display compared to her last encounter.

As the crest of a head emerged, Izzy chose to duck behind one of the many discarded vehicles on Arnost’s junkyard’s front. She had expected merely one but from her crouch position, she could now see many shapes approaching. This would perhaps be a blood bath. With whose blood she was not sure of. Izzy only hoped it would not be her’s.

Finally close enough for her vision to take in the whole scene Izzy stumbled falling on her derrière.

“Holy crap, It’s a Thriller video and me without a red jacket!”

Like in true Izzy form, she chuckled at her warped sense of humor. Yeah, laughing when she is scared out of her mind is always her first call to action. The second is to kick some zombie ass.

Their step was slurred and staggered. Although they did not come at a great speed, their decayed bodies moved on with a definite determined ever-demanding need. Halting as many as Izzy could with her new ability to freeze. The new power it seemed could halt to a point in time around her chosen subject. Leaving them immobilized while time cruelly moved by around them. So far, Izzy had learned she could freeze a room of standing still humans. While slow moving, of what she could only assume to call, zombies were a bit harder to master.

This was starting to become a full workout. A half summersault over a rotten corpse with a back twist over another and she was beginning to sweat. Then as if a prayer to her calls Arnost appeared and shouting as, he approached…

“Don’t waste your energy trying to freeze them all. You have to burn them. Its fire or the blood of the one they track to halt them. Hurry now and bring the lighting forth and burn the hell out of them.”

This pain was something in the future she hoped would lessen but as of now it hurt like no other. Calling the electric force forth through her body, it began to break the flesh of her fingers. Just as she could feel the blood pour from her, she aimed her strikes toward the walking dead. Laying a strong, enough charge to set them burning as their hollow forms still tried to move forth.

When once slowing to a halt Izzy turned to view the horrors of the yard. Much of the ground lay littered with scorched spots. What was not blackened by the flames, still burned on with rotten flesh caught in the remaining blazes’ grasp. The scene looking much like Hell had moved above ground. 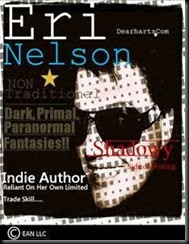 From the Author:
I am overjoyed that you have stopped at one of my books, my author profile, or a link to learn more about me. As the total creator of everything you might hold between your hands at the time of purchasing any of my books, I must warn you that errors may be at foot. I am very hands on with every aspect that might bare my name. Due to that fact typos or oops might appear.

This simple trademark to myself is one of the main reasons I have dawned a new leaf' to my writing career. All of my work can now only be found off of my own site dearharts.com/ and my Facebook Store

Please read more below on my biography.

About the Author:
Eri Nelson born Erica Walcott is a Indie Author and the youngest of three in a family of five. Erica became Eri (airy) from her mother who called her that for as long as she could remember. The short take on her name took on a more solid base with the love of her life and husband, Jeff Nelson.
Together they have been for the past twenty years. Within that time they were able to raise one daughter and endless amount of pets.
Writing is a passion for her and an abundance of never ending joy. Only one thing tops that for Eri... and that is when a reader enjoys the read......

(More on Eri)
Eri Nelson is a nontraditional indie author who manages all areas of her fiction, fantasy, paranormal, action, adventure and sometimes-erotic writing. Eri handles all the groundwork of her books, even the editing. Because of this Eri strives to improve her abilities along with trying to explain to readers her far from traditional sentence structures. However, she will openly admit that typos follow her.
Join Eri and her shadowy side of writing as she takes you along to explore new desire hunger filled worlds where your mind can share in the heat of the read.