Cover Reveal: THIS COULD HAVE BEEN OUR SONG by Danielle-Claude Ngontang 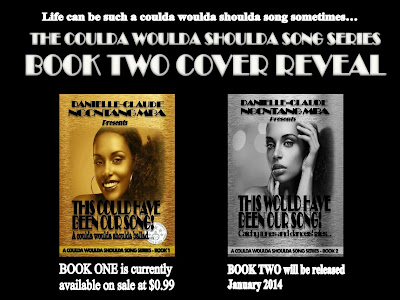 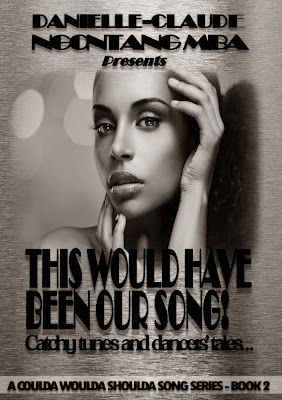 Synopsis
Book Two:
This would have been their perfect love song…It has been two years since Lucia Mpobo-Riddell has made her choice between the two men in her life. She and her beloved would have been perfectly happy if it wasn’t for… the constant distractions from her past, her sister Noor’s complicated life, her own doubts and fears. Maybe there wasn’t such a thing as perfection and this was a lesson that Lucia was going to learn the hard way.


Greg McMullen and Marcus Grant’s lives had been affected by Lucia’s choice that day in Glasgow two years ago. Since then one had been fighting to keep her when the other had been relentlessly trying to get her back. It soon became apparent to them that she wasn’t the Lucia they met and fell in love with anymore. Her life and priorities had completely shifted. To even consider keeping her or just getting her back, they would have to accept it or they would have to let her go. But would they ever be able to do either? 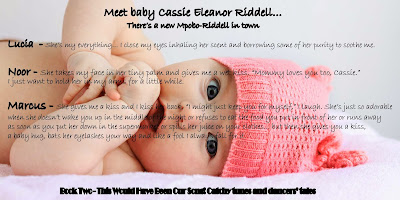 X. Lucia - Pondering about all these things that she’s done?
“Look it’s your mama!” Marcus says to Cassie. She’s comfortably settled in his arms, her tiny chubby arms around his neck. “It’s… wow Lucia you look great!”
I love you Fabrice, styling me from head to toe, before I leave for work every morning… against my will and all! “Hiya, I’ll take this off your hands,” I tell him with a big smug smile.
“No!” Cassie says and holds him tighter.
Don’t embarrass Mama, she’s having an awesome moment here. “Or maybe not… so taking a break from your modelling career?” His hair is longer than mine! That’s so sexy and when did his arms get so big and defined? Hello Marcus 2.0 or Mercutio…. I think Cassie is having a crush. She keeps leaning her head on his chest and smiles.
“I like to mix it up,” he laughs back and Cassie giggles with him.
Right… “Hi Mary, fancy meeting you guys here. I didn’t know you were using this studio too,” I tell her.
She glances at her outfit, simple dark skinny jeans, a loose top and flat boots. What? No stylist hidden in your closet? She glances at my short blue vintage floral tea dress, my bare naturally tanned legs and my strappy high heels. He did my hair and makeup too. “Hi Lucia,” she simply says.
That’s right, Fabrice you deserve a raise! “I’m here with Tallie Wilson for the next few weeks but I’m hoping to do part of the album in the Abbey Road Studios,” I say to both of them.
“We use this location when we’re not in my flat,” she says with a hint of something else. Is Marcus blushing? “Anyway, you do look great!” Her work is done, she planted her seed. Well played Mary!
“Thanks,” I say trying to take Cassie from Marcus again but she’s still resisting. “I’m representing my label. I need to look the part.” I’m just repeating B, Alex and Fabrice sales’ speech. Mary and Marcus hum in agreement. I’ll never doubt those three again.
“Mary, lunch sounds fantastic right now,” Marcus tells her and release her hand. They were holding hands? How did I miss that? “But as you can see, I am now otherwise engaged,” he says looking at Cassie. She gives him a very wet kiss. “Just like a Riddell to kiss first!”
I’m so embarrassed. “Shame on you Mercutio! Still seducing babies I see.” Our eyes lock.
“Who’s Mercutio?” Mary asks losing her patience. That girl needs some food in her. She’s so damn skinny!
“Only the best Italian male model in London,” I let out in a laugh.
“Whatever! I don’t have time for this. I’m supposed to meet the director for the music video,” she tells Marcus. She just stares at him like some kind of ultimatum.
“Yes go get something to eat. You’re so fucking skinny!” I whisper but not as low as I wished.
“What!” Mary asks.
“Nothing.” Marcus is trying to suppress a laugh, Cassie is looking at him like is the best thing she’s ever seen. “I was just wondering why you don’t have your own label by now. Most artists at your level do.”
“Why do you mean?” she crosses her skinny arms.
Marcus’ look says the same thing. “Well you would have full creative take on your work, even discover and groom new artists. Influencing the way music evolves. Mary you have so much talent and experience, I’m just surprised you haven’t gone that route…yet,” I tell her, a big manipulative smile on my face.
Marcus is rolling his sexy eyes at us. “What you don’t think I can do it? Thanks Marcus! Lucia you and I need to do lunch,” she says walking away.
“Sure!” Victory!
“Marcus, I’ll see you tonight? My place?” she says.
“I’ll be there,” he mumbles back. Fuck! Time to leave, but he has my kid. “Luce, look at me. I’m not sleeping with Mary,” he says getting closer to me.
“It’s none of my business. I just want my daughter back Marcus,” I say back. I try to take Cassie but she starts to whine so I let her go.
“Don’t do this, I’m not shagging Mary,” he says again. He tries to give me Cassie but she starts to cry. “Okay Cassie, I keep you.”
That is just really pathetic, “Alright, you’re not sleeping with her… whatever!” I shrug.
“You know, with her being so damn skinny and all!” he jokes.
“Bobo?” Cassie asks him.
“Bobo?” he asks me.
“Food, she’s hungry. We were on her way to the kitchen when she escaped.”
“Bobo it is, lead the way,” he tells me. I hesitate for a minute. I could just grab her and go. She’ll cry for a bit then settle down. Lucia?”
“This way.” 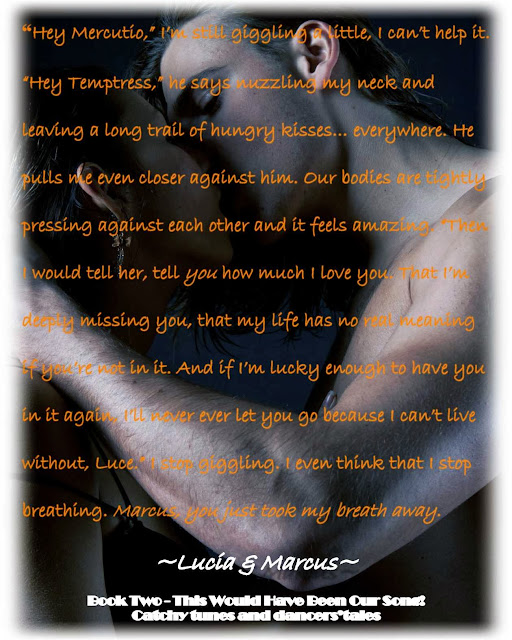 Chapter Title Playlist
This is a series about music and as the title says it’s all about catchy tunes. Enjoy!

Chapter I
Lucia – We are family my sister and me… we’re going to do it for ourselves! ( We Are Family by Sister Sledge & Sisters Are Doing It For Themselves by Eurythmic and Aretha Franklin)
Chapter II
Greg - Together forever and he’s never going to give her up… Mashup! (Together Forever & Never Gonna Give You Up by Rick Astley)
Chapter III
Eleanor -  Like a total eclipse of the heart or a real blast from the past ( Total Eclipse of the Heart by Bonnie Tyler)
Chapter IV
Marcus - Out of love and air supplies… (All Out Of Love by Air Supply)
Chapter V
Lucia - Twisting and shouting her way to Paradise City (Twist and Shout by The Beatles & Paradise City by Gun N’ Roses)
Chapter VI
Nooradine - He’s got…hungry eyes… Was this really meant to be? (Hungry Eyes by Eric Carmen)
Chapter VII
Greg - Every breath she takes… (Every Breath You Take by The Police)
Chapter VIII
Axelle – If he’s not the one… (If You’re Not The One by Daniel Bedingfield)
Chapter IX
Marcus - As Doddy Grant always says, carry on my wayward sons! (Carry On Wayward Son by Kansas)
Chapter X
Lucia - Pondering about all these things that she’s done? (All These Things That I’ve Done by The Killers)
Chapter XI
Marcus - More than any words… (More Than Words by EXTREME)
Chapter XII
Greg - Ain't no sunshine! (Ain't No Sunshine by Bill Withers)
Chapter XIII
Lucia found love. What is she going to do with? (Now That We Found Love by Heavy D & The Boyz)
Chapter XIV
Noor’s lights keep reading D.A.N.G.E.R., how long would she able to hold on? (Red Light Spells Danger by Billy Ocean)
Chapter XV

If you want to listen to it: 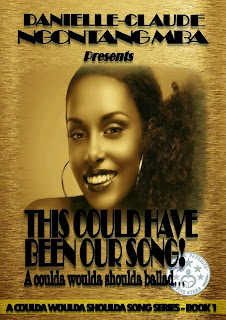 Book one:
Love can be such a “coulda, woulda, shoulda” song sometimes…
Lucia Mpobo-Riddell could have been a dancer like the rest of women of her family but instead she chose music. Marcus Grant could have been a doctor like the rest of his family but instead he chose music. She also could have not fallen for Marcus on her birthday but she did. And Marcus, he could have told Lucia the truth about his real reason for being in Toronto that night, but he didn’t. Now they have to deal with big reveals and consequences: Marcus almost stealing her job and being force to work on an album together. Marcus, because he couldn’t swallow his pride, leaves Toronto and goes home to London. Lucia, because she just couldn’t give up on her first amazing opportunity to produce a whole album. And to complicate the situation further, the band they’re working for is not the easiest one. Mary Gillis, Marcus’ on and off flame, still has a hold on him. Greg McMullen, Lucia’s close friend and former dance partner is back in town and has been in love with her for years. Then there’s Marcus and Lucia, in the middle of their own a professional and personal tug-of- war with each over and the rest of the world. But maybe things could still work out… All things considered, this could have been one heck of a love song! 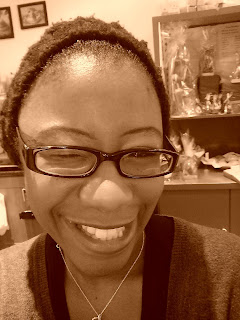 “My life journey is like my playlist, amazingly unique but full of contradictions with surprising joys with every song...”
I was born in Quebec City, Canada from Gabonese parents but grew up in Paris and Libreville the Gabonese capital until the age of 18. Are you yawning yet? I am...
I moved back to Canada in 1999 after high school in Libreville to study Cinematography and Digital movie production in Laval University in Quebec then The International Academy of Design and Technology in Toronto. After graduating in 2003, I decided to sell my soul to the corporate world and worked in the Benefit Outsourcing Industry for seven in Toronto before reconnecting with her first passion writing.
"A teacher told me in high school that people didn't read anymore so I decided that I would make movies instead...so that didn't stick…"
I finally went back to school to study creative writing at Georges Brown College in 2010 and 2011. I started to write The Coulda Woulda Shoulda Song Series as an assignment and finished Book One in late 2011 before moving to London.
And the rest as they say is history... Almost two years later, I'm in London and wrote three novels: This Could Have Been Our Song! A coulda woulda shoulda ballad... (Book one) currently available on amazon and soon in iTunes, Kobo, Barnes and Nobles and Smashwords. The sequel This Would Have Been Our Song! Catchy tune and dancers tales will be release in January 2014. Bird Of Prey, my first mystery novel will be release in October 7th, 2013 on paperback before its wide release in November 25th, 2013. It will be followed by The Plot Thickens (a novella) in January 2014 and Polliannah Got Married! in April 2014 or earlier.