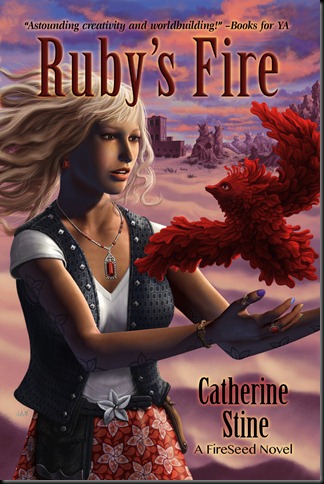 Ruby's Fire by Catherine Stine
Series: Fireseed, #2 (however, can be read as a stand-alone)
Publication date: June 26, 2013
Genre: YA Sci-Fi

Synopsis:
If everything about you changes, what remains?
Seventeen year-old Ruby, long-pledged to the much older Stiles from the Fireseed desert cult, escapes with only a change of clothes, a pouch of Oblivion Powder and her mute little brother, Thorn. Arriving at The Greening, a boarding school for orphaned teens, she can finally stop running. Or can she? The Greening is not what it seems. Students are rampaging out of control and as she cares for the secret Fireseed crop, she experiences frightening physical changes. She’s ashamed of her attraction to burly, hard-talking Blane, the resident bodyguard, and wonders why she can’t be happy with the gentler Armonk. She’s long considered her great beauty a liability, a thing she’s misused in order to survive. And how is she to stop her dependence on Oblivion to find a real beauty within, using her talent as a maker of salves, when she has nightmares of Stiles without it?
When George Axiom, wealthy mogul of Vegas-by-the-Sea offers a huge cash prize for the winner of a student contest, Ruby is hopeful she might collect the prize to rescue her family and friends from what she now knows is a dangerous cult. But when Stiles comes to reclaim her, and Thorn sickens after creating the most astonishing contest project of all, the world Ruby knows is changed forever. This romantic fantasy set in 2099 on earth has a crafty heroine in Ruby, and a swoonworthy cast, which will surely appeal to the YA and new adult audience.
Goodreads: http://www.goodreads.com/book/show/17970591-ruby-s-fire
Purchase:
Amazon Paperback 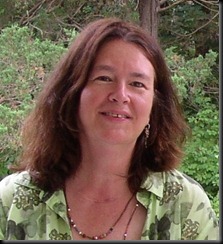 Catherine Stine writes YA, New Adult and middle grade fiction. Her YA futuristic thriller, Fireseed One, illustrated by the author won finalist spots in both YA and Science Fiction in the 2013 USA Book News International Book Awards. It was also granted a 2013 Bronze Wishing Shelf Book Award and a 2013 Indie Reader Approved notable stamp. Her YA Refugees, earned a New York Public Library Best Book. Middle grade novels include A Girl’s Best Friend.
Fireseed One sequel, Ruby’s Fire is earning advance praise from reviewers and authors:
“Ruby's Fire, returns to the sun-scorched earth of Fireseed One. In this long-awaited sequel, Stine delivers a thrilling adventure led by a new and exciting cast of characters. Ruby, Armonk, Thorn and Blane are memorable, and the romance is really well handled. Favorite quote: " It feels wrong to lean on Armonk right now with Blane staring at me, a hungry, lonely look in his eye. It’s as if he’s never been hugged, never been fed, never been loved..." ” -YAs the Word
More and more, Catherine enjoys writing speculative tales where her imagination has wild and free reign. She has taught creative writing workshops at the Philadelphia Writing Conference, Missouri University Summer Abroad, The New School and in her own ongoing NYC writing workshop. She loves her readers, and enjoys blogging.
Author Links:
Website / Goodreads / Facebook / Twitter
Posted by Unknown at 10:30 AM