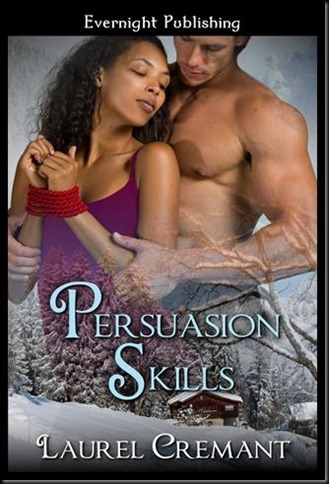 In the aftermath of a major health scare, Pepper Holts makes the relief-inspired decision to seize the day. Unfortunately, most of her “seizing” involves a bit of merlot and her best friend's pants! After a shared night of passion she realizes that her feelings for Jax are a lot more complicated than she ever thought.

Jax has finally realized that his allergy to marriage has nothing to do with the institution itself, and everything to do with the women in his bed—or more specifically, the one woman not in his bed. Her reaction to their one night together has him scrambling to regroup. So he does what he knows best—he disappears, and he thinks. The plan?—convince Pepper into staying with him at a secluded cabin for one week. One week of pretending to be a happily married couple to show her how great they could be together.

The smooth humming of an engine finally wove its way up the road as he continued to chop.

He glanced up from his task in time to see a slate grey SUV make its way up the gravel path that passed as the driveway to his cabin. Within a few seconds, he could see Pepper’s face peering at him through the front window.

The usual sense of peace that her presence always gave him rushed through, right before his skin tightened in a zing of awareness. Seeing her never failed to jumpstart his senses. Her features had changed very little since college, but she’d grown her afro out to a long mass of curls that stretched past her shoulders.

At that moment, the mouth he’d secretly lusted after for years was set in a firm line, and a blaze of anger shone in her steady gaze. Neither warning sign prevented a smile from spreading across his face as the car drew near.

She wore a white snow cap with earflaps, her curls spilling around her shoulders, and what looked like a heavy white winter coat. She looked like a ferocious bunny.

If looks could kill. He chuckled softly.

He swung the axe one last time and planted the blade firmly in the chopping block before walking leisurely to the top of the drive and waiting.

It wasn’t hard to keep the smile on his face as his gaze caught hers and held. He could practically feel the waves of rage rolling off of her as she pulled the car to an abrupt stop only inches from where he stood.

He merely winked at her and gave a cheerful wave. God, he loved hunting rabbits.

She stared at him for a searing moment before climbing out of the tall vehicle and dragging out a medium-sized piece of luggage. She snapped up its telescoping handle and marched the few steps it took to stand in front of him.

He let his gaze wander over her frame, taking in the rapid rise and fall of her chest, the tight grip she had on the luggage handle, and the clenching and unclenching of her free hand. Yet the only thing that caused his smile to dim was the hurt mingled with the outrage on her lovely face.

He let his gaze drift back to her clenching fist for a moment before looking at her face again. Staring into her eyes, he let loose a loud sigh as he widened his stance and shoved his hands into his coat pockets.This is going to hurt.

He let the taunt hang in the air, waiting for her to speak, react, do anything.

She stared at him for a few seconds before her eyes swelled with unshed tears.

The sight caused a small ache in his chest. Nothing ever hurt as much as seeing Pepper cry.

The thought barely registered in his mind before she pulled back her clenched fist and slammed it squarely on his jaw.

His head jerked to the side with a snap.

He let loose a few more choice expletives. Trust Pepper to have a killer right hook.

The stars in his eyes cleared just in time for him to watch her turn and stomp toward the porch steps and up to the front door of the cabin.

“Feel better now?” he called out to her retreating back.

Her answering response was a decisively unladylike hand gesture over her shoulder before she entered the cabin and slammed the door behind her.

He rubbed his jaw for a few seconds before turning and walking to the car door. Peering inside, he glimpsed the keys still dangling from the ignition.

Reaching inside, he pocketed the keys before popping the hood of the SUV open.

“Well, let the games begin,” he muttered to himself as he walked to the front of the car and reached under the hood.

He barely winced in pain as a smile spread across his face while he reached into the belly of the car and yanked out a bundle of wires.

Laurel is a romance author, who like most writers loves to read. Her first love (pun intended) has always been romance. From the sappy YA romance novel to the more risqué erotica novels, Laurel is a sucker for a good love story.

Laurel writes paranormal and contemporary romance and is a self proclaimed, out of the closet nerd. She admits that she can't seem to avoid adding a bit of "nerdology" or "geek-dom" to all of her books. Living in Miami, she also admits that she can't seem to avoid giving her heroines gorgeous shoes, "In Miami, we worship everything strappy, open toed and just plain hot!"