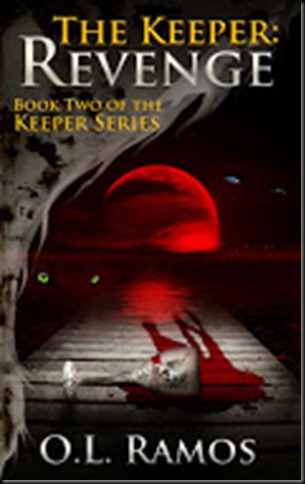 Elizabeth is a brilliant loner with a troubling secret she doesn't even know. As if the trauma of her mother being abducted before her eyes as a young girl wasn't enough, the small town she lives in thinks she’s crazy. That all changed when she met Michael, a mysterious and handsome man who identified with her like no one else before. Michael’s long time friend Vincent visits and drops the bombshell of a lifetime on Elizabeth and her world becomes completely unraveled.

Vincent’s information has revealed the world for what it is; a place where the impossible is real, and myths and legends walk slyly in shadow. A world that Elizabeth will learn she too is a member. Now, the three are caught up in a thousand year long conspiracy they never could have imagined. The three must rely on one another and the secret connection they all share if they have a chance to survive.

The Keeper: Awakening (Book 1) on Amazon

The Keeper: Awakening on Smashwords

The Keeper: Awakening on Goodreads

The Keeper: Revenge on Goodreads

“So what am I, then?” I ask after gathering enough courage.

“You’re a keeper,” Vincent says as he avoids my stare, instead choosing to look straight ahead. “A keeper, as in keeper of the blood. You are the rarest super there is, custos sanguinis. Your kind comes around once every few generations, if at all. And when your sort does show up, all hell breaks loose. Which is why I’m so thrilled you chose to know the truth. It will make protecting you that much easier.”

“All hell breaks loose?” I ask as I near the point of hyperventilation. “Why? What do you mean? Does this have something to do with the ring?”

“Something to do with it, yes,” Vincent says as he stares at the bottom of the glass bottle. “Your kind is one of the most unique supers there are, Izzy. You ever sleep with anyone?”

Vincent turns to face me with a sly smile. I slap him in the face as hard as I can, especially now that I know I can’t physically hurt him.

“You really should stop slapping me,” Vincent suggests with another smile. “I might start liking it.”