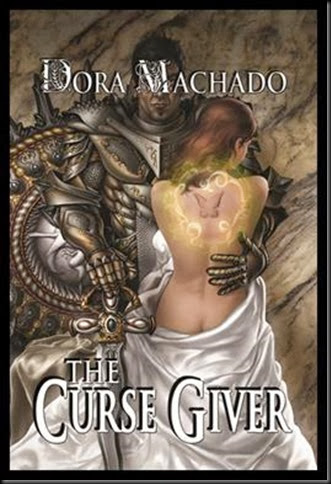 Lusielle's bleak but orderly life as a remedy mixer is shattered when her husband betrays her and she is sentenced to die for a crime she didn't commit. She's on the pyre, about to be burned, when a stranger breaks through the crowd and rescues her from the flames.

Brennus, Lord of Laonia is the last of his line. He is caught in the grip of a mysterious curse that has murdered his kin, doomed his people and embittered his life. To defeat the curse, he must hunt a birthmark and kill the woman who bears it in the foulest of ways. Lusielle bears such a mark.

Stalked by intrigue and confounded by the forbidden passion flaring between them, predator and prey must come together to defeat not only the vile curse, but also the curse giver who has already conjured their ends.

The Curse Giver Chapter One

Dread stared at Lusielle from the depths of the rowdy crowd. Concealed under a heavy hood, only the stranger’s black eyes dared to meet her gaze among the growing throng. The man’s eyes refused to flinch or shift from her face. His stare was free of the hatred she had gotten from the others, but also devoid of mercy. He held on to her gaze like an anchor to her soul, testing her fortitude, knowing full well her fears’ vast range.

She had always been meant for the fire. Even as she had escaped the blaze that killed her parents and burned the inn to the ground, Lusielle had known that the flame’s greedy god would return to claim her life. But she hadn’t expected it to happen after days of torture, surrounded by the raging mob, found guilty of a crime she didn’t commit, betrayed and condemned.

The town’s cobbler, one of her husband’s best customers, tightened the noose around her neck until it cut off her breath. She had waited on him countless times at the shop, and had always padded his order with a free measure of coriander to help with his wife’s cough.

But none of the town’s inhabitants seemed to remember any of her kindnesses as of late. On the contrary, the crowd was booing and jeering when they weren’t pelting her with rotten fruit. They treated her as if she were a common thief.

The brute who had conducted her torture shoved the cobbler aside, tying her elbows and wrists around the wooden stake. Orell. She remembered his name. His bearded face might have been handsome if not for the permanent leer. Like the magistrate, he wore the king’s burgundy colors, but his role had been more vicious. Had he been granted more time, he might have succeeded at extracting the false confession he wanted, but the magistrate was in a hurry, afraid of any possible unrest.

Orell yanked on the ropes, tightening her bonds. The wound on her back broke open all over again. She swallowed a strangled hiss. It was as if the thug wanted her to suffer, as if he had a private reason to profit from her pain.

But she had never seen him until three days ago, when he and the magistrate had shown up unannounced, making random accusations.

Lusielle couldn’t understand any of this.

She knew that the king’s justice was notoriously arbitrary. It was one of the main reasons why she loathed living under King Riva’s rule. But she also knew better than to express her opinion. Ruin and tragedy trailed those who dared to criticize the king. That’s why she had never mentioned her misgivings to anyone.

What had she done to deserve this fate? And why did they continue to be so cruel? After all, she wasn’t fighting them anymore.

True, she had resisted at first. Out of fear and pride, she had tried to defend herself. But in the end, it hadn’t mattered. Her accusers had relied on the testimony of the devious liar who had turned her in—Aponte Rummins—her own husband.

The mock hearing had been too painful to bear, too absurd to believe. Aponte swore before the magistrate that Lusielle was a secret practitioner of the forbidden odd arts. It was ridiculous. How could anyone believe that she, who had always relied on logic, measure and observation to mix her remedies, could possi¬bly serve the Odd God’s dark purposes? And how could anyone believe Aponte’s lies?

But they did, they believed him as he called on his paid witnesses and presented fabricated evidence, swearing that he himself had caught her at the shop, worshipping the Odd God. In the end, it had been her husband’s false testimony that provided the ultimate proof of the heinous charge for which Lusielle was about to die.

Burning torch in hand, the magistrate stepped forward. Still in shock, Lusielle swallowed a gulp of bitter horror and steeled for the flames’ excruciating pain. She didn’t want to die like a shrieking coward. But nothing could have prepared her for what happened next.

The magistrate offered the torch to Aponte.

“The king upholds a husband’s authority over his wife in the kingdom,” the magistrate shouted for the crowd to hear. “There can be no protests, no doubt of the wisdom of royal justice if a husband does as he’s entitled to do by his marital rights.”

Aponte could have forgone her execution. Considering the magistrate’s proclamation, he could have chosen a different punishment for her. Instead, he accepted the torch and, without hesitation, put the flame to the tinder and blew over the kindling to start the fire.

“Go now,” he said, grinning like a hog about to gorge. “Go find your dark lord.”

Lusielle glared at the poor excuse for a man who had ruined her life many times over. She had known from the beginning that he was fatally flawed, just as he had known on the day he claimed her that she couldn’t pledge him any affection.

But Aponte had never wanted her affection. He had wanted her servitude, and in that sense she proved to be the reluctant but dutiful servant he craved.

Over the years he had taught her hatred.

His gratification came from beating and humiliating her. His crass and vulgar tastes turned his bed into a nightmare. She felt so ashamed of the things he made her do. Still, even if she loathed him—and not just him, but the slave she had become under his rule—she had tried to make the best of it.

She had served him diligently, tending to his businesses, reorganizing his stores, rearranging his trading routes and increasing his profits. His table had always been ready. His meals had been hot and flavorsome. His sheets had been crisp and his bed had been coal-warmed every night. Perhaps due to all of this, he had seemed genuinely pleased with their marital arrangement.

Why, then, had he surrendered her so easily to the magistrate’s brute?

Aponte had to have some purpose for this betrayal. He was, above all, a practical man. He would not surrender all the advantages that Lusielle brought to him—money, standing, common sense, business acumen—without the benefit of an even greater windfall.

Lusielle couldn’t understand how, but she was sure that the bastard was going to profit handsomely from her death.

The scent of pine turned acrid and hot. Cones crackled and popped. The fire hissed a sinister murmur, a sure promise of pain. She didn’t watch the little sparks grow into flames at her feet. Instead, her eyes returned to the back of the crowd, seeking the stranger’s stare. She found him even as a puff of white smoke clouded her sight and the fire’s rising heat distorted his scarred face’s fixed expression.

The nearing flames thawed the pervasive cold chilling her bones. Flying sparks pecked at her skin. Her toes curled. Her feet flinched. Pain teased her ankles in alarming, nipping jolts. Dear gods. They were really going to burn her alive!

Lusielle shut her eyes. When she looked again, the stranger was gone from the crowd. She couldn’t blame him. She would have never chosen to watch the flame’s devouring dance.

A commotion ensued somewhere beyond the pyre. People were screaming, but she couldn’t see through the flames and smoke. She flinched when a lick of fire ignited her shift’s hem. A vile stink filled her lungs. Her body shivered in shock. She coughed, then hacked. Fear’s fiery fingers began to torment her legs.

“Come and find me,” she called to the God of fire.

For a free excerpt of The Curse Giver, visit http://twilighttimesbooks.com/TheCurseGiver_ch1.html 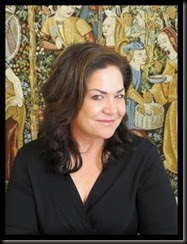 Dora Machado is the award winning author of the epic fantasy Stonewiser series and her newest novel, The Curse Giver, available from Twilight Times Books July 2013. She grew up in the Dominican Republic, where she developed a fascination for writing and a taste for Merengue. After a lifetime of straddling such compelling but different worlds, fantasy is a natural fit to her stories. She lives in Florida with her husband and three very opinionated cats.

To learn more about Dora Machado and her novels, visit her website at www.doramachado.com

For a free excerpt of The Curse Giver, visit http://twilighttimesbooks.com/TheCurseGiver_ch1.html