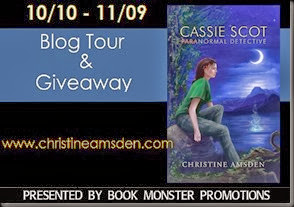 Today on the blog we have paranormal detective Cassie Scot for an interview. Sit back and let’s find out more about Cassie and her world.

I've always been good at reading people. I think that's what makes me good at what I do, even if I am a bit young in some people's opinions. I'm not sure if that's my best quality or not, but it's a good one.

My worst quality is easy – I have no magic. You might think that's no big deal, but if so I'm guessing you weren't born into a family of powerful sorcerers. I'm the oldest of seven – and the only one without magic or even a gift!

I sometimes think people know too much about me. There was a time when I used to pretend I had magic – or just not correct people when they found out what my last name was. It gave me a sort of power.

I had a huge crush on Evan Blackwood in high school. Please don't tell him. He's full of himself as it is.

At the moment, vampires.

I have a boyfriend, Braden. Been seeing him for three years, ever since my high school graduation party. I'm not sure about him, though. You'd think after three years I would be. That's probably a sign.

Colorful. I don't do black. I often wear current styles, but only if I like them. When they went to drab grays and browns a while back I was just glad I still had a closet full of clothes to tide me over.

I wouldn't describe myself as a rebel at all. I'm trying to be independent, but that's not at all the same thing. I love my family more than anything, and my friends almost as much.

I killed a vampire last night. Not quite single-handedly (I'm not suicidal here), but I did it.

I think I'd be insanely happy if I just had some magic.

Anxious. I've been anxious for a while, and it's not just about the vampires – although apparently there's more than the one I got. I have this bad feeling about the fact that my mom is pregnant again. There are seven of us right now... that's a powerfully magical number. Eight isn't.

Honestly, for all the nice clothes I have in my closet, I'm not a material girl. I think I could walk away from all of it if I had to.

I care about people. I interfere a little bit, too, but it usually works out. I'm helping Madison to come out of her shell (she's terribly shy), and I do my best with Kaitlin and her boyfriends. There's only so much I can do there, although when one of them was being abusive, I gave him a nice case of hives. (That potion doesn't take any magic. No, I won't share the recipe.)

Sorcerers who think their power means they get to do whatever they want (even if they're usually right).

I'd like to say that I'm most attracted to nice men, and I think I am, but I know there's a secrets part of me that's drawn to power.

Sheriff Adams. I really am very tempted to go back to work for him. I probably should. I think I'd learn a lot from him.

Remember to check out today’s book blast to find out more about Cassie and her world.