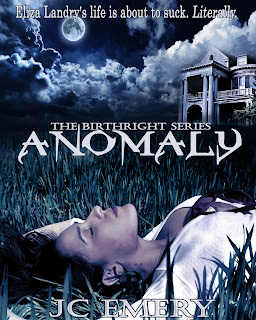 Eliza Landry has always been the sick girl unable to take care of herself. From a young age an illness have claimed her and transformed her life to “poor Eliza”. Her older sister Kate has been responsible to ensure her safety and health. But that is about to change.

Walking home one night from a party both their lives was about to change from bad to real ugly. Eliza and her sister are attacked by ruthless vampires and Eliza ends up between human and vampire. An anomaly. But Kate is nowhere to be found.

Eliza ventures back to the scene of the attack to try and track down her sister; instead what she finds is a vampire. Luke Conrad was about to reveal a world she didn’t want to know existed, but quickly needed to get a grip on.

With Luke’s help they start searching with dead bodies found around New Orleans looking for her sister. But when she does find her sister Eliza discover that her new world was deadly and surviving it would mean she embraces her new life and fight back.

Eliza’s character starts out where most does. Uncertain and scared she tries and face her new world and all its problems. With every attack against her and her friends she starts using and developing the new Eliza. Scared gives away to courage and trust becomes a luxury she needs to avoid. Luke is the all bad and down to business vampire, but unlike the romancing Edward his doesn't do nice. From the moment they meet it is clear that he will play an epic role in this series.

As I adventured more into this book a big connection was made to Karen Marie Moning’s Fever series minus fae. But unlike Mac what Eliza discovers about her sister will start a war between two very different vampire groups. But their characters develop much the same and with great speed to survive their new worlds. Some of Barron’s character was also found in Luke and that means we have but scratched the surface with him.

Many have said that vampire novels have become predictable and boring. However true in many cases some fresh new plots are found in Anomaly. We don’t have overbearing romance and normal human life. Instead JC Emery has given us a more realistic plot with real pain and more action. For me this was a relieve. To find something more than just the usual “love you to death” fix. Eliza’s dilemmas seem more realistic as to what a human would have to deal with when it comes to paranormal creatures. I will be looking out for book two to continue the journey.

Quote from the book: “Her words promised more to come. I just didn't know if I could take anymore, but it didn't look like I had a choice in the matter,”

Stay tuned for an interview with JC Emery
Posted by Unknown at 8:39 AM