5 *Review and Character Interview: The Highland Henchman by

I get so few times to go all crazy and totally throw a fan moment, well today I get to do it! I absolutely love this series and so far have been left with some heavy withdraw symptoms. I cant wait for the next one! I also want to congratulate Amy with Beauty and the Barbarian that made it into the quarter finals of the ABNA awards. Now hold on we not only have a review but also a Character Interview with the star of The Highland Henchman, Bran. Oh my gosh, this guy was in my dreams for nights! 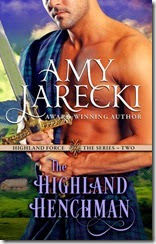 Intent on winning a Lowlander’s tournament, Bran MacLeod travels south with his laird. All goes as planned, except spirited Miss Enya Ross continually distracts him, and in the oddest situations. With no business lusting after a baron’s daughter, Bran decides to return to Raasay—until his laird pledges Bran’s services in the fight to reinstate Mary, Queen of Scots to the throne.
Enya has no deference for the lines of nobility, or for the Great Divide that separates Lowlanders from Highlanders. The way Sir Bran’s eyes hunger for her ignites an internal fire Enya cannot quell. All her life she’s wanted adventure and excitement, but now her every thought is consumed with the rugged Highlander.
With all odds stacked against them, can their forbidden love withstand the tumult of war and the menace of betrayal?

The Highland Henchman by Amy Jarecki
My rating: 5 of 5 stars

Now a man Bran sets sails with his Laird to the lowland’s to content in games arranged by a lowland Lord. Now knighted, Bran’s only focus is to protect Laird Calum and to win these games and walk out a champion for his clan. But he’s plans are soon tested when a young lass shows up and stirs way too much in Bran.
Before he knows it he has started to fall in love with the young lass, who is no other than the Lord Ross’s daughter, Enya. But a match between a highland henchman and a royal lowland lass cannot be. As much as Bran tried to stay away from Enya, she just had a nick for showing up and pushing Bran to the limit of control. It isn’t long before the highlander cannot resist her anymore, and all hell breaks loose around them.

Wow, just wow. That was all I could utter when I finished this book. The first book in the series was amazing, and the second book was just epic. I fell instantly in love with Bran. He is a beautiful character filled with honor and a great heart. Just utterly perfect. Enya captured my heart as well. Born in a time when women wasn’t allowed to venture about like a man, she dreamed of just being free and seeing the world. A strong fighter herself, she doesn’t just stand down and take a beating. Their love story edged close to Romeo and Juliet, but with a huge difference. I just loved it. Once again Amy proved that is able to not only capture a reader’s attention, but also a reader’s heart. When the part came of Bran being tortured I had to hold back the tears and curses. And when Enya had to endure her own torture the screen became unexplainable blurry. Once again Amy had me experiencing all possible human emotion that one can experience in life.

Amy Jerecki knows how to build an exceptional plot filled with characters you will have no choice but to love. An amazing talent indeed. There is no doubt that this have easy became one of my favorite series and there is no way I am going to miss any books within it. I will be the one constantly begging Amy for the next book, it’s just that addictive! If you haven’t picked up this series you are losing out on one hell of a series. Well done Amy, well done.

Ooo now for the interview with Bran!! 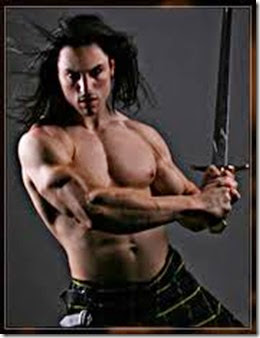 Yeah I am drooling, can you blame me?!

Interview of Sir Bran MacLeod from The Highland Henchman:

Amy Jarecki, time traveling character interviewer here. I nearly lost my life bringing you this story from the perilous times of 1568, sailing in a birlinn through the Sound of Raasay in a nasty squall, the boat ran aground capsized in the icy northern waters. But who came to my rescue but the henchman himself, Sir Bran MacLeod. Better yet, the enormous man with his long chestnut hair braided away from his face and intense hazel eyes agreed to an exclusive interview…

Amy: Thank you for pulling me from the sea and saving my life.

Bran reclines in his chair comfortably and spreads his arms to his sides: Yer thanks is not needed, m’lady.

Amy: Tell me what you felt the first time you saw Miss Enya Ross.

Bran: That would be when I spied her hiding behind a copse of yellow gorse up on the hill. She had the look of a hunter—albeit a beautiful one. But I was there to protect me laird, and I eyed the bow slung over her shoulder with a wee bit of alarm.

Amy: Did you think she’d attempt to fire one of her arrows?

Bran chuckles: Nay, but as henchman, me duty is no’ to act upon what I think, but to consider all possibilities for something to go awry.

Amy: But then you saw her again that night at the gathering. How did you feel then?

Bran: Aye…I’ll never forget her green frock and the way her auburn tresses flowed down her back. I coudna keep me eyes off the lassie, and there I was defending Laird Calum. Anyone could have knocked me flat with a tap between the eyes.

Amy: I doubt that. You’re as enormous as the story touts you to be.

Bran leans forward and waggles his eyebrows: ’Tis why Calum made me henchman.

Amy: True, and yours is the most powerful sword.

Bran shrugs: Aye, that too.

Amy: What was it like to be knighted by Queen Mary?

Bran: Och, ’twas a moment in time I’ll nay forget. Honestly, I thought she might try to lop me head off with the sword—I did no’ have me shirt on and I was certain to be reprimanded. When she touched the blade to me shoulder and uttered the words, “I knight you into the Order of the Thistle,” it was as if the world was floating in a dream. I could scarcely draw a breath—afraid to look at her I was.

Amy: But then you did look up.

Bran: Aye. She had a regal air about her—the tallest woman I’d ever seen, truth be told.

Amy: How did you feel when you thought Laird Calum had betrayed you?

Bran: I’d lost me temper before, but that was like falling into a fire pit of unbridled rage. I couldna believe he’d crossed me. I questioned me entire lifetime of loyalty.

Amy: What would you have done if you were not tied to the mast?

Bran shudders: I hate to think on it. I would have struck out like a raging bull for certain. Calum did the right thing by tying me up before he handed Enya over to Lord Ross, but it still makes me gut roil to think of it. If I could go back in time, I’d fight rather than see Enya “cleansed” in the nunnery. We outgunned Ross and his men. We could have taken them.

Amy: How did you feel when you finally had Enya in your arms again?

Bran: So many emotions coursed through me. But cradling me bonny lassie in me arms, I never wanted to let go. If anyone dare threaten her again, God save them because they’d have me wrath and me blade to contend with first.

Amy: What are your plans for the future?

Bran: Did ye hear the news? Enya is with child again. We plan to have a large brood, she and I. I’ve even got plans to build onto me cottage.

Squeals! I cant get enough of these men! If you haven't started this series yet, you are missing out! Go get it now!