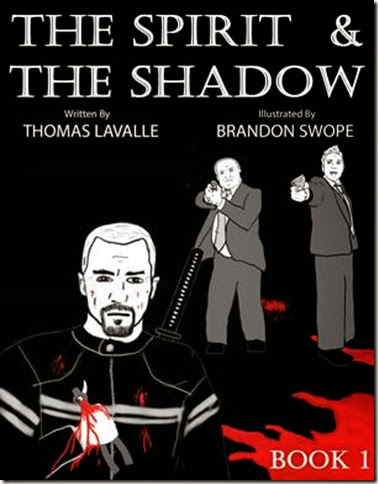 The Spirit and The Shadow

A fast-paced, paranormal suspense thriller from a new creative team that keeps you on the edge of your seat as you are pulled into the chase for a vampire by those who want his secret, others who are out for justice, and one man seeking revenge.

In a world where vampires and humans coexist, Detectives Aiden Lawson and Robert Garrison are after a vampire wanted for murder. This accused vampire is also hunted by the murder victim's brother, an assassin gone rogue from his clandestine agency. What these men will learn, is that this vampire has a secret – a secret that very powerful men and vampire alike will go to great lengths to acquire. The story follows the paths of these individuals as they uncover the truth. THE SPIRIT AND THE SHADOW is a mash-up of conspiracy and paranormal genres with suspense, vengeance, and BLOOD!

Thomas: As a child, I wanted to be a starting pitcher for the NY Yankees – by 15 ...  lead singer for an alternative grunge band.  By the time I got to college, I realized I couldn’t pitch or sing and full-time college student seemed like a reasonable career path.  Eventually though, I did graduate and got a real job.  I didn’t start writing till I was 24, and it quickly became one of my favorite hobbies.

Brandon: The Spirit and the Shadow is a conspiracy and paranormal genre mash-up with suspense, vengeance, and a promise ... there will be blood!

Brandon: We self published through a company we started, No Rules Media and Publishing.

Thomas: It took Brandon and I just about two years to finish the first book ... mainly because our day-jobs and surfing got in the way ... plus Brandon decided to start brewing his own beer, and I thought “that’s it!  I’ll never see a new drawing again!”  lol.

Brandon: Ha!  Beer brewing is a minor distraction ... Let’s not forget we both moved and had new babies while creating the book!

Thomas:  If I had to look back and take a guess ... it took about six months to outline and draft the series and experiment with art style and layout, and about 12 months to finish the second draft with art.  The next four months were editing, illustration clean-ups, and character refinement (this is where I try to really ensure my characters have unique voices and are consistent to their personalities through the book)  The last two months was final editing and independent reviews.

What can we expect from you in the future?

Brandon: Right now we’re focused on Book 2 of the series, with our goal of completing a trilogy.  However, we already have ideas for other installments past the initial series.  I’m looking at evolving the art as Tommy’s story is getting bigger and bigger!

Thomas:  I love this world we have conceptualized and have started building in the first book.  I believe we have some really strong and original ideas on vampire mythology that I am excited to further develop.   I can promise anyone that reads our book, we have an ending.  We know where this is all going, and it will be EPIC!

Thomas:  We didn’t pick the genre.  We wanted to tell a story using Brandon’s illustrations in a way different than a traditional graphic novel.   After talking about a several ideas, we both had common interest in vampires.  I took that and started brainstorming ...  I had an idea of starting with a dead man murdered in an ally – his throat ripped out by a savage bite.  Above him stood a vampire with a badge.  I asked Brandon to sketch it.  He did, and it was the basis of the opening image in our book.  From there, I built my story around that murder mystery ... I outlined the entire story, sent to Brandon...

Brandon: Niklas.  He’s a very complex character – a trained and successful assassin, enraged by the death of his brother, but still maintains a strong moral compass.

Thomas: Daniella.  I’m a sucker for the sexy, smart, sassy assistant.  She was easily the most fun to write and (I think) steals the show!

Who or what inspired you to write?

Thomas: In my early twenties, I had some ideas for stories, but never did anything with them.  This may sound silly, but I really didn’t have the courage to write them.  I thought they would probably suck.  I thought, “Who am I to write anything?”  My good friend (BC) encouraged me to write my first story.  It took two years to finish, and it is sitting on my hardrive waiting for me to revisit, revamp (and convince Brandon to draw, lol)

Thomas:  I do my best writing when I have stretches of uninterrupted quiet time!  I try to make the habit of always writing down story ideas as soon as I have them (along with a note of what gave me the idea in the first place).  I usually can go back and develop it at my own discretion... but need to have that seed planted in my notes.

Brandon: Absolutely!  As this is our first book, it’s important to read all the feedback we get.  We take away what we think is important and leave the rest.

Thomas:  I try not to force it, but it does help having it there in the beginning (even if it’s going to change) – Just helps with realizing the overall vision.

Brandon: We based a lot of the character names on significant people in our lives.

Thomas:  “Niklas” is no one specific.  I work with a guy who spells his name that way, and thought it was cool.  Without giving a spoiler, a “villain” in our book is named after someone I personally do not like, and was able to project that frustration I have with this real life person in that character.

Thomas:  I write the story first then developed the characters.  This just works best for me.  I am very plot focused in the beginning.  I am too concerned with everything making sense and knowing where the story is going to get stuck with character details.  Also, I don’t know what the characters look like during the initial drafting, I left that entirely up to Brandon...

Brandon: I defined initial character looks while Tommy was drafting the first script.  After I sent them to Tommy, he made various text revisions to further develop the traits and define the characters more robustly.

Thomas:  The second draft is where my character’s voices really take shape and I find each unique identity.  My editor (JennaRose Garriton) was big in the process of making characters more identifiable and consistent throughout the book.

Thomas:  Yes, and that is all I will say about that!  I want everyone to read this and take away from it whatever resonates with them.

Brandon: eBook.  The convenience of having multiple books in-hand coupled with the light weight nature of eReaders is very appealing and for me wins out.  However, I do miss the visceral experience of holding a book, turning the pages, and the distinct paper smell.  If I have a book, I prefer hardback editions.

Brandon: Fierce Invalids Home From Hot Climates (By Tom Robbins).  The main character Switters goes on a zany adventure to South America and back, the story is quite ridiculous, which is part of the allure.  The way the author writes and the descriptions/metaphors he uses is unlike anyone else.

Brandon: I think they can, especially if it is a shorter book to begin with and there is no sacrifice on content, or if the book is very long winded and a movie condenses it to reasonable size.  Steven King’s short story Stand by Me is an awesome example of how this can be done effectively.  Also, Game of Thrones, which is an incredible story but I found hard to read because of the excruciating detail, is a great series to watch. Another good example is the Hunger Games series, which successfully translate into film.  However, more often than not I finish a movie feeling that it doesn’t do the book justice – one example is an older movie from a book I really like, Even Cowgirls Get the Blues, is a pretty terrible movie rendition.

Thomas:  If anyone from Hollywood is reading this interview, please email us to discuss turning our book into a movie and/or TV show!

Brandon: I love good food and good craft beer, especially when paired together.  However, pound for pound few things are better than a good burrito from your local taco shop.

Brandon: This is hard, for a long time Jane’s Addiction and NIN topped the list.  Now I listen to a lot of Dandy Warhols and TV on the Radio.

Brandon: Oddly enough, or maybe not, as an artist I don’t have a favorite color.  I do generally prefer more natural earth tones than bright neon.  With respect to our book though, it is definitely red! 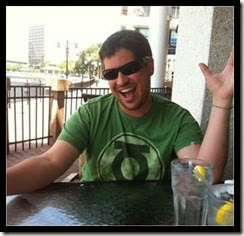 I have been advised against announcing that I am a first-time author – that it is basically asking a reader to take a chance in my book even though I have no track record. I have no history in fiction writing, never won any awards, and never took a literature or writing class (outside of basic 101 level college courses). While not advised, it is the truth, and as honest as this bio is, so is my writing. My name is Thomas Lavalle. I am a first time writer. I also surf, read comics, and I’m a dedicated father and husband. If you’re interested in paranormal suspense - take a chance and check out my book, it’s awesome!