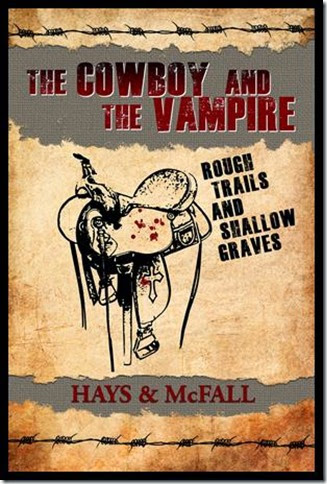 Rough Trails and Shallow Graves
The Cowboy and the Vampire Collection
Book Three
Clark Hays and Kathleen McFall
Genre: Paranormal Romance/Western Romance
Publisher: Pumpjack Press
Date of Publication: May 5, 2014
ISBN: 978-0-9838200-4-8
Number of pages: 358
Word Count: 82,900
Cover Artist: Aaron Perkins
Book Description:
Say goodbye to LonePine, Wyoming, a typical small town in the American west with typical small town problems — romantic intrigues, warm beer and vampires.
When Lizzie goes missing on their wedding night, Tucker is forced to team up with his bloodthirsty Russian nemesis to find answers. Crashing through cowboy country, the vampire spirit world and wrecked salmon canneries, they confront an evil more ancient than even the undead — human greed — twisting science into something terrible.
Can there be a happily-ever-after for a cowboy and vampire, or is their unusual love just a delusion? Time to cowboy up.
This is the third book in The Cowboy and the Vampire Collection.
Available at Amazon
Reviews of the first two books….
Introducing racial issues isn’t the only adjustment the authors have made to the vampire mythos, but it’s more than just the details that set this series apart. Rather, it’s the way the authors utilize those details to create meaningful conflicts and world-altering choices for the characters...the book is first and foremost a thriller, upping the ante in every chapter as bullets fly and relationships strain under the weight of old loyalties and new revelations…with strong writing, funny characters (no irony is lost on one vampiress who takes to sporting a “Future Farmers of America” jacket) and plenty of action, it’s hard to fault the authors for keeping the focus on a story this riveting. ~ Kirkus Reviews
As a vampire novel, The Cowboy and the Vampire is sure to satisfy Dracula fans’ expectations. However, this book has a little something extra to offer readers. A little something that harkens back to the days when man fought against the wild in the name of civilization. Hays and McFall have succeeded in mixing the Western genre tropes with the Gothic conventions to create a zany grey romance.
~ Writastic Thoughts from the Thinking Realm
One of the weirdest stories I have ever read. It’s right up there with Neil Gaiman’s man-swallowing woman parts and talking tents. Instead, here we have rocket-launching, womb-sucking, Bible-bending, non-pointy-toothed vampires. And love. And cowboys. Depending on what you are looking for, that might be a good thing. If I had to liken this book to a movie, it would either be to Tucker & Dale vs. Evil, or maybe more appropriately, Quentin Tarantino’s From Dusk to Dawn.
~ The Avid Reader

The Cowboy and the Vampire: A Very Unusual Romance is one of the funniest and most engaging books I have read in a long time. Jam-packed with adventure, vampires, true love, and a cast of characters you will not soon forget, you find yourself turning the pages thinking, “What more could possibly happen to these two?” And then, you find out. I never imagined the melding of a contemporary western and a paranormal romance could ever be so seamless or so much fun.
~ Bitten by Books
A choice and very much recommended read, not to be missed. Relationships are tumultuous when they may only last a few decades, but when they last eternity, it can get more difficult. “Blood and Whiskey” is a novel of adventure, horror, and cowboys as a follow up to previous novel ‘The Cowboy and the Vampire’, as couple Tucker and Lizzie retreat to a tiny town to of LonePine, hoping to settle down, but the reality of the Vampires on their trail may make that an impossibility. A riveting read that explores many concepts on top of the intrigue of vampires in the lawless lands of the west, “Blood and Whiskey” is a choice and very much recommended read, not to be missed. ~ Midwest Book Review, Micah Andrew, Reviewer
If you’re looking for a combination of sex, blood and Western romance, pour yourself a shot of the good stuff and settle in for a wickedly good read.
~ Renee Struthers, Eastern Oregonian Newspaper 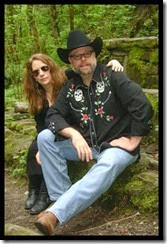 Between the two of them, Clark Hays and Kathleen McFall have worked in writing jobs ranging from cowboy-poet to energy journalist to restaurant reviewer to university press officer. After they met, their writing career took center stage when they wrote the first book in The Cowboy and the Vampire Collection as a test for marriage. They passed. Clark and Kathleen now live in Portland, Oregon.
www.cowboyandvampire.com
www.facebook.com/cowboyandvampire
@cowboyvamp (Twitter)
@cowboyvampire (Instagram)