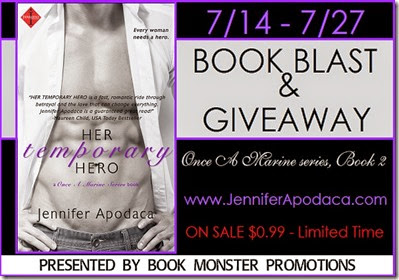 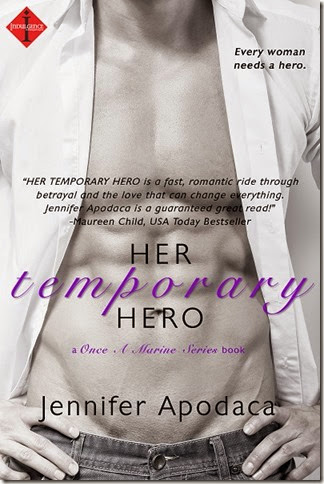 Former beauty queen Becky Holmes and her baby are on the run from her dangerous ex. With her dreams of love and marriage destroyed, she’ll do anything to protect her child…even agree to hide out in her boss’s cousin’s house while he’s away.

Wealthy, sexy, and emotionally haunted Logan Knight needs a temporary wife to get his land, per his dad’s rules. No wife, no inheritance. But when that wife lands on his doorstep and comes with a baby, his darkest memories are triggered. He tries to keep his distance, but his efforts are shattered when he starts to have real feelings for his fake wife and child.

Just as Logan begins to think he may have a future with Becky, his attempt to have it all backfires into a betrayal that forces Becky into a heart-wrenching choice no woman should ever have to make.

Her breasts bounced, hips swayed, and that smile never once lost its glorious perfection. Total high-fashion model and girl next door rolled into one breath-stealing, hard-on inducing package. She coasted to a stop when her bare toes nearly touched the tips of his boots.

The sultry scent of honeysuckle wafted from her. Tilting her head up she said, “With more than ten years in beauty pageants, I know posing when I see it.”

Sweat popped out beneath his shirt and his dick swelled.

It wasn’t just the sensuality of her walk and pose, but the way she’d just put him in his place. “You win.” His voice came out low and rough. For days they’d been dancing around this desire between them. He could almost see the streaks of electricity arcing between them.

Her flawless smile melted, and her gaze locked onto his. “What’s my prize?”

Those three breathy words fried his brain until all that remained was fiery need. Logan buried his hands in her heavy, silken hair. “A kiss.” 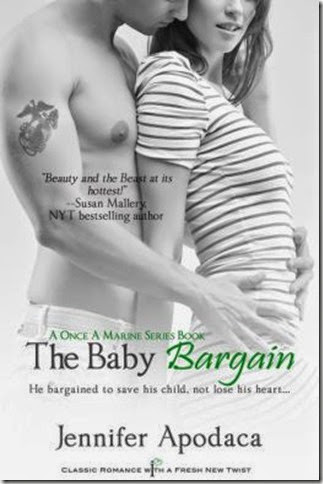 Seeing Adam Waters is the last thing veterinarian Megan Young expects. Ex-Marine. Ex-boyfriend. And still extremely dangerous territory. But Adam doesn’t know the secret Megan has been keeping from him. The secret that was created three years ago, after their last night together...

Adam returns to Raven’s Cove to sell his home in a final break with the town and memories that haunt him. The problem is that his attraction to Megan is as blazing hot as it ever was. But when a vicious smear campaign against Megan turns ugly, Adam learns the truth he never knew—he has a son.

Now the only way Megan can protect her child is to strike a bargain with Adam. And it’s a bargain that looks a lot like blackmail... 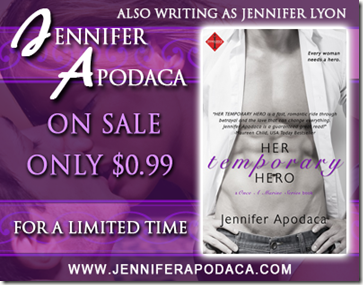 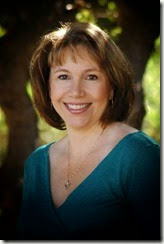 Award winning author Jennifer Apodaca grew up in Southern California and met her very own hero at the dog pound. She worked there, he came in on a business, and it was puppy love. They married and had three wonderful sons.

While her husband worked on his master’s degree, Jen did the mom thing by day and went to college at night with the intention of perusing a marketing degree. But her true passion was writing. With time at a premium, she had to make a choice.

Choosing writing, and with the full support of her husband, she poured herself into her dream. A mere eight years later, she published her first book DATING CAN BE MURDER. In her career, Jen has written a fun and sexy mystery series and a variety of contemporary romances. Taking the pen name of Jennifer Lyon, she also created a dark, sizzling paranormal series, and most recently, The Plus One Chronicles, an emotional and sexy adult contemporary series.

Jen has achieved many of her dreams except for attaining a self-cleaning house, a latte delivery service, and finding the holy grail of nonfattening wine and chocolate. She can live with those disappointments as long as she can keep writing the stories she loves to share with readers.