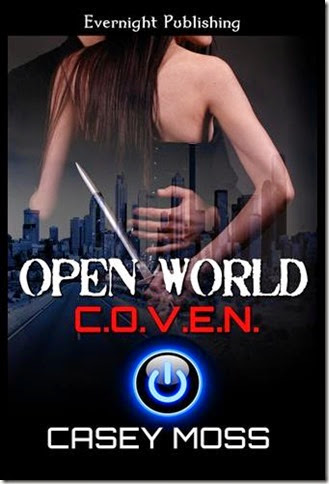 The world has broken out in wars. Las Vegas has been ravaged by chemical warfare and is now home to several clans and creatures.

Friends and family have gathered for a crunch time playtest of C.O.V.E.N.. When a horrible thunderstorm hits, everyone’s sucked into the game for real. In the MMORPG, Hope Collins is kidnapped by Buzz and forced to submit to his whims.

Her boyfriend, Alden, has to delay his quest of defeating a clan’s prince to save her, but time and circumstance don’t seem to be on his side. Faith Collins is bombarded by strange dreams brought on by Buzz. Her boyfriend, Tavis, learns to dream walk, but can he help break the spell she’s under and save her before she’s lost to him?

Perhaps he’d been under too much stress, had too much caffeine, didn’t have enough sleep or information about the guy. More likely a combination of it all. A hodgepodge of shit and no shovel. He didn’t know how much more of all this he could take.

Shaking off the negativity, Alden rotated his head, listening to his spine crackle and pop. Tension released. The quick adjustment perked him up. He plated the burgers, closed the lid to the grill and exhaled a deep breath. First food, then work, and amongst it all, see if I can figure out Mr. Jenkins’s deal. Making his way toward the small group, the tray of hot meat balanced on one hand, he focused in on Cor, noting his body language and how the people around him responded.

Why did I imagine him as the antagonist? The one in the game I need to destroy?

The storyline he had to double check during the playtest dealt with finding the main boss—the Prince of Clan Caesachapel—and defeating him before the cad could cause harm. He’d intended to assist Hope and her family in creating ‘good’ characters, placing them in the clan he belonged to, and have them run the quests, as well. But with the way he’d been feeling, he almost reconsidered that idea.

Thing was he had a job to do. One he aimed to make good on and see through to the end. He’d never been the kind of guy to shirk a duty, and he wasn’t about to start now.

Mr. James Collins, a middle-aged man with graying, strawberry blond hair and ice blue eyes, glanced Den’s way as he approached. James acknowledged him with slight nod, then returned his attention to Cor.

The fact James was only a programmer and not his direct boss—or above him in any authoritative capacity in the organization—pleased Den. The man sure ran hot one moment and cold the next when it came to him. Hope had explained that was one of her father’s personality quirks and not to take it personal.

Some future father-in-law he would turn out to be.

Plastering a smile on his face, he placed the dish of meat on the aluminum table. James and the ladies’ attentions stayed fixed on the gentleman in their midst. Good. No one paid him any mind. More time to assess the situation.

Cor’s intense brown-eyed gaze bored into Hope’s, infiltrating her defenses and working whatever magic the man seemed to possess. Their connection resembled flirting but in a stronger sense. His chest tightened and burned. Mine, his inner voice asserted in a low, rolling growl, reminding him of his in game character’s speech. Alden stepped back before he could choose to put his fist in Cor’s face. His foot crunched on a chip bag that had fallen to the ground.

Mesmerized. Shit. And not just her. Enthralled by the bean counter, the whole family overlooked him like he didn’t exist.

What the hell is going on?

For a very brief period of time, I had ideas of becoming a teacher or an astronaut. Both occurred before the age of ten. But for the most part, I knew I wanted to write at a young age, as early as I learned to read. I was always cooking up stories to entertain myself in the rural area I lived in. Had to since there were no other kids around to play with. My defining moment came when I received an A in English in grade school. I was just shy of being a teenager when I had my ‘calling.’ Ever since then, most of my choices in life have revolved around my goal of becoming a full-time fiction writer and being published.

As I stated above, just shy of being a teenager.

Actually, once I put my mind to it and made writing my main focus, I wrote some novellas and they were accepted right off the bat. The first book I’d written and put ‘in the closet’ I took back out polished it up and it was accepted a couple months after my first novella was accepted. So not long at all.

My latest book is Open World – C.O.V.E.N.. It’s not just a game to the players. It’s a whole other world.

Casey’s passion lies in darker fiction. Her stories fall into the horror and urban fantasy genres. Sometimes there’s also the blending of paranormal, suspense, thriller, romantic elements and/or eroticism in the stories. Some of the stories are even set within her home city of Las Vegas. But if she’s done her job right as an author, all the stories should set you on edge, leave you craving and wanting to explore more of the dark.

I usually have a title before I start. For some reason if the story isn’t named, it’s hard to get going on it.

Sometimes the characters just show up, like someone I meet for the first time who I get to know real quick, and they introduce themselves. Other times I have inklings and vague ideas of who the characters are and I’ll create astrological charts for them to get a deeper sense of them. Once I have a better understanding about them, I'll consult baby name sites online to see if I can get a name based on an aspect of the character. Last names are a bit more tricky. Sometimes I'll see names in the credits of television shows or movies that would work. Other times I'll consult last name sites online.

Most times I have a good character sketch before I start, but sometimes the characters surprise me with more traits as we go along getting the story down on paper.

It depends upon the story and the author how I’ll purchase his/her book, but I’ll read via paper or via electronic. I’m flexible.

Remembrance by Jude Deveraux. I loved the time travel aspect and how soul mates keep meeting up in each lifetime. And, yes, I’ve read it more than once. In fact I’ve been thinking of re-reading it again.

Most times I don’t believe they transfer well. It got to the point where hubby wouldn’t want to watch a movie with me if I’d already read the book cause I’d start pointing out stuff that was different. If I remember correctly, The Shining was pretty close to the book.

Depending upon my mood it’s either blue or black.

I have a few… Anne Rice; Stephen King; KC Klein to name three 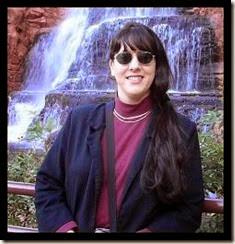 Casey Moss delves into the darker aspects of life in her writing, sometimes basing the stories on reality, sometimes on myth. No matter the path, her stories will take you on a journey from the light-hearted paranormal to dark things unspeakable. What waits around the corner? Come explore…